Alex Bowman gives out a significant update on his contract negotiations with Hendrick Motorsports ahead of the 2023 season.

Alex Bowman had a rough end to the 2022 season after suffering a concussion during the first race of the Round of 12 at Texas Motor Speedway. Bowman would return to Phoenix Raceway for the final event of the year.

Now, the driver of the No. 48 car has rising star Blake Harris as his crew chief in a major year. Bowman and Ally Financial’s contracts with Hendrick Motorsports expire at the end of the 2023 season.

It will be important to perform well as the business side of NASCAR is unpredictable. Let’s dive into the latest updates on the contract situation from Bowman himself ahead of the new campaign.

Related: Hendrick Motorsports expected to keep Alex Bowman in the No. 48 car

Alex Bowman ‘encouraged’ about an extension with Hendrick Motorsports, doesn’t want to leave

Bowman has been a full-time driver for Hendrick Motorsports since the 2018 season after Dale Earnhardt Jr. retired from the sport. Then, the 29-year-old driver replaced Jimmie Johnson in the No. 48 car for the 2021 season.

It is clear the organization likes Bowman and that should help his future in NASCAR. This is what Bowman told FOX Sports’ Bob Pockrass about his contract negotiations with Hendrick Motorsports as the 2023 season is starting to near.

“I am encouraged on where things are. Both sides are working on it. Hopefully we can put something together…I don’t want to go anywhere else.”

Alex Bowman on his contract negotiations with Hendrick Motorsports

It is not shocking to hear Bowman express his desire to race anywhere else as there are going to be rides available at the end of the season. This includes the No. 4 car for Stewart-Haas Racing as Kevin Harvick will step away from full-time racing.

Hendrick Motorsports is one of NASCAR’s powerhouse teams alongside Joe Gibbs Racing and Team Penske. Bowman’s best option is the No. 48 car and there are no reasons why that should change moving forward.

Ally Financial loves the Arizona native and if the full-season sponsor sticks around long-term, it would not be surprising to see him with the organization years down the road. The partnership feels likely to continue into the future. 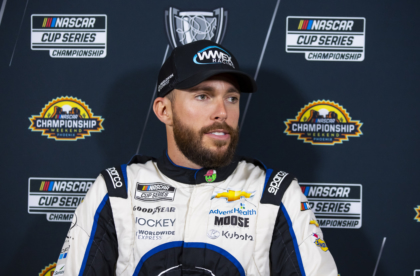 If something unexpected happens and Bowman does not return, there will be other rides available, such as Trackhouse Racing with Ross Chastain and Daniel Suarez scheduled to become free agents.

Either way, Bowman is set to stay in the NASCAR Cup Series for the foreseeable future and as he reaches this point, one should not forget about his journey to a top team.

LAFB Network - WATCH: A Look At The USC Trojans Recruiting Efforts | Are They Back Or Is There Still Work To Be Done?