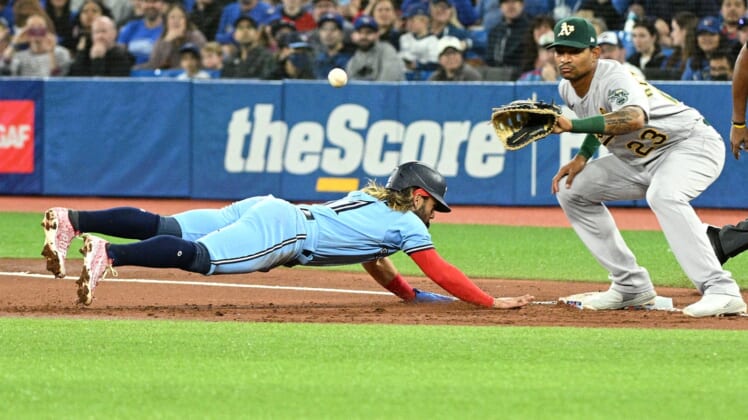 Manoah (2-0) allowed four hits, two walks and a hit batter while striking out six in the finale of a three-game series.

Jordan Romano pitched around a walk in the ninth to earn his sixth save of the season. He has converted 29 straight save opportunities dating to last season.

Stephen Vogt had a solo home run for the Athletics, who finished their season-opening road trip at 5-5.

Zack Collins led off the bottom of the second with a double to right and scored on Santiago Espinal’s single. Oller allowed a walk in the inning that ended on a double play when Springer was ruled to have interfered with catcher Vogt when he struck out on Cavan Biggio’ stolen base attempt.

Toronto took a 3-0 lead in the third on Gurriel’s two-out double and Matt Chapman’s single.

Oakland scored twice in the fifth. Vogt led off with his first homer of the season. Kevin Smith singled and was forced at second by Cristian Pache. Tony Kemp’s single put runners at the corners and Sean Murphy hit a sacrifice fly.

Toronto scored an unearned run in the bottom of the fifth. Gurriel singled against Ryan Castellani and came around to score when Smith threw the ball into foul territory on a grounder to shortstop by Chapman, who went to third.

Tim Mayza replaced Manoah and pitched a perfect 1 1/3 innings with two strikeouts. Adam Cimber took over with one out in the eighth and allowed singles by Murphy and Chad Pinder and Seth Brown’s sacrifice fly.