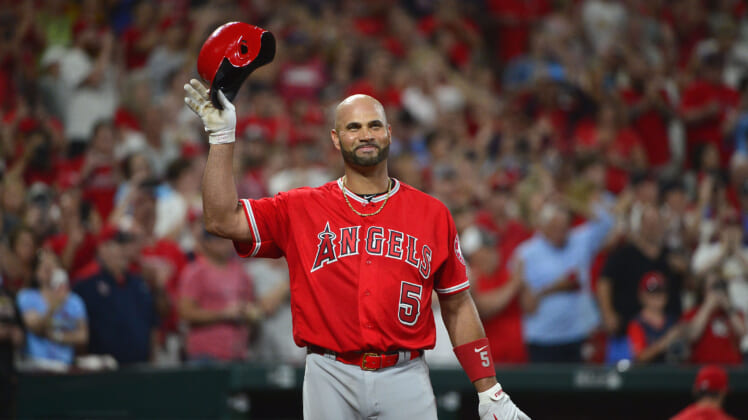 From 2001-11 with the St. Louis Cardinals, Albert Pujols was among the most-feared hitters in all of baseball.

In his prime, Pujols absolutely dominated pitching. That included earning three NL MVP awards during a five-year span from 2005-09.

For most baseball fans, Pujols’ tenure in St. Louis went down as one of the greatest in the modern history of MLB.

Now 42 years old, there’s a growing belief that Pujols could return to the Cardinals as a free agent this spring.

“The Cardinals have had increased conversations with three-time MVP Albert Pujols, and interest is growing in bringing back the former Cardinal for the 2022 season, multiple sources familiar with the situation told The Athletic.

Pujols, 42, would not be an everyday player. Rather, he would serve as a right-handed bench bat, similar to the role St. Louis identified when they inked outfielder Corey Dickerson to a one-year deal last week.”

Albert Pujols ending his career with the St. Louis Cardinals would be fitting

A 10-time All-Star, Pujols was designated for assignment by the Los Angeles Angels last season. The future first ballot Hall of Famer then latched with the Los Angeles Dodgers and performed pretty well. In 85 games with the blue, he hit .254 with 12 homers and 38 RBI.

To be clear, we’re not talking about the Cardinals’ iteration of Pujols making his way back to the Gateway to the West. He’s a shell of his former self and has been for some time.

If Pujols were to return to the Cardinals, it would be as a late-inning power bat and someone who could potentially fill in as a designated hitter at times.

It would also be an absolutely great story heading into Opening Day for both Albert Pujols and the Cardinals.