Albert Pujols: ‘My time to retire hasn’t arrived yet’

Los Angeles Dodgers first baseman Albert Pujols will be playing in the Dominican Professional Baseball League this winter, but that doesn't mean he's through with Major League Baseball.

"I made a promise," Pujols said Friday after he was introduced as the newest player on the Leones del Escogido. "I said I was going to play here before I retire. But that doesn't mean that I'm going to retire yet. My time to retire hasn't arrived yet. Why do I have to retire because someone tells me to? I'm going to do it on my terms and when I feel I can't play anymore."

The Santo Domingo native, who turns 42 in January, played in 109 games during his 21st major league season in 2021.

"When Albert Pujols gets tired of playing baseball, that's it," he said. "I'm not going to go out there and embarrass myself. I've trained really hard and worked on my body to be able to have a good career. ... I know what I can do." 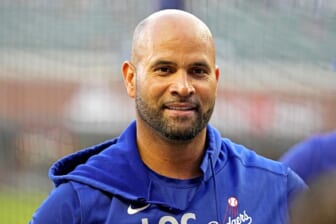 Pujols surely would not cost nearly as much as the last time he hit free agency, when he inked a landmark 10-year, $240 million contract with the Los Angeles Angels following the 2011 season after 11 years of elite production with the St. Louis Cardinals.

He did not finish that contract with the Angels, who released him in early May after Pujols hit just .198 with five homers in 24 games. But the veteran rebounded after joining the crosstown Dodgers less than two weeks later. Pujols became a valuable plug-and-play as a first baseman and pinch hitter, hitting .254 with 12 home runs in 85 games over the final 4 1/2 months, perhaps adding to his future value.

Regardless of whether or not he returns next season, the longtime first baseman/designated hitter has cemented his Hall of Fame-worthy legacy. Pujols ranks fifth on baseball's all-time home-run list with 679 and third with 2,150 RBIs while holding a .297 career batting average. The 10-time .300 hitter has surpassed 30 homers in a season 14 times and 40 or more seven times.

Pujols won World Series championships with the Cardinals in 2006 and 2011. He has three MVP awards and made 10 All-Star teams and six Silver Slugger squads.