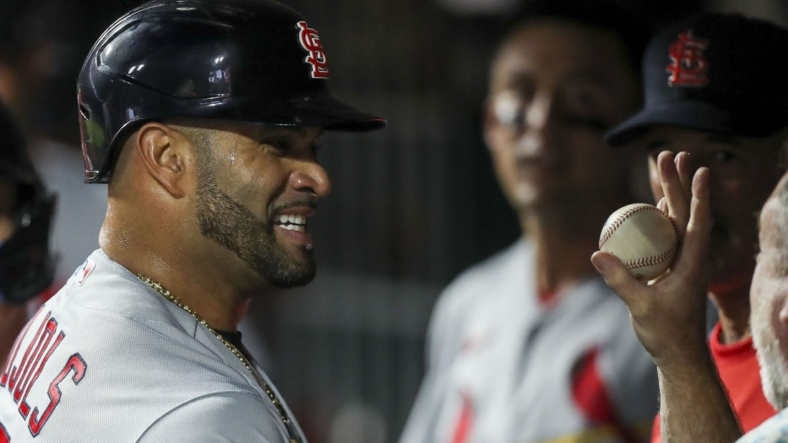 Tyler O’Neill hit two homers and drove in three runs for the Cardinals, who won for the 13th time in their last 16 games. Nolan Arenado, Brendan Donovan and Tommy Edman drove in two runs each.

Cardinals starter Miles Mikolas allowed four runs on six hits and one walk with three strikeouts in 4 1/3 innings. Reliever Chris Stratton (7-4) got the Cardinals through the sixth inning to earn the victory.

Rain delayed the start of the game for 1 hour, 41 minutes. The rain returned midway through the sixth inning and caused a 36-minute delay.

The Cardinals seized a 6-0 lead in the second inning after O’Neill started the outburst with a one-out solo homer.

Pujols and Corey Dickerson hit singles, then Andrew Knizner walked to load the bases. Edman hit a two-run run double to knock Anderson out of the game.

Lars Nootbaar greeted Detwiler with an RBI single and Donovan hit a two-run single. After O’Neill’s leadoff walk in the third inning, Pujols hit his homer to push the Cardinals’ lead to 8-0.

The Reds cut their deficit to 8-4 with a fifth-inning power surge. Solo homers by TJ Friedl and Stuart Fairchild and Chuckie Robinson’s two-run blast led to Mikolas’ early exit.

The Cardinals responded with four runs in the sixth inning. Nootbaar walked, Donovan reached on an error, Arenado hit a two-run double and O’Neill hit a two-run homer to make it 12-4.

With infielder Alejo Lopez pitching for the Reds in the ninth inning, Dickerson hit a leadoff homer to make it 13-4.