Albert Pujols hits No. 698 as Cards rally past Reds 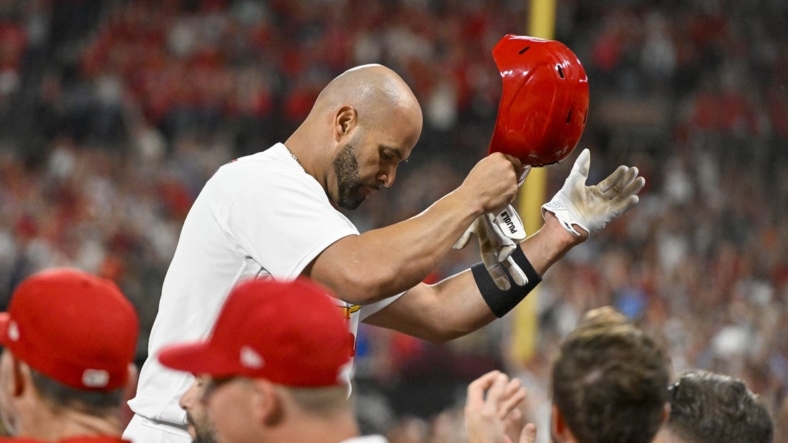 Cardinals starter Jack Flaherty allowed four runs on six hits and two walks in five innings. Reliever Chris Stratton (9-4) earned the victory and Ryan Helsley struck out the ninth-inning side on nine pitches for his 18th save.

That was the Cardinals’ first immaculate inning since Jason Isringhausen in 2002.

Cincinnati took a 1-0 lead in the third inning. Nick Senzel led off with an infield single and moved to second on Arenado’s throwing error. Spencer Steer walked, then Flaherty hit TJ Friedl with a pitch before Jonathan India hit a run-scoring fielder’s choice.

St. Louis tied the game at 1 in the bottom of the inning. Tyler O’Neill walked, stole second base and scored on India’s throwing error on Brendan Donovan’s infield single.

Austin Romine and Friedl hit singles to start the fifth, then Flaherty hit Farmer with one out. Fraley hit a two-run double and Aristides Aquino hit an RBI single to put the Reds up, 4-1.

The Cardinals tied the game at 4 in the sixth. Goldschmidt hit a double and scored on Arenado’s single. One out later, Pujols’ homer evened the score.

Farmer greeted reliever JoJo Romero with a leadoff homer in the seventh to put Cincinnati back ahead, 5-4.

But St. Louis surged ahead 6-5 their half of the inning. Donovan walked and scored on Goldschmidt’s double. Arenado followed with a double for the game-winning RBI.