Albert Pujols hits No. 696 as Cards rally to beat Pirates 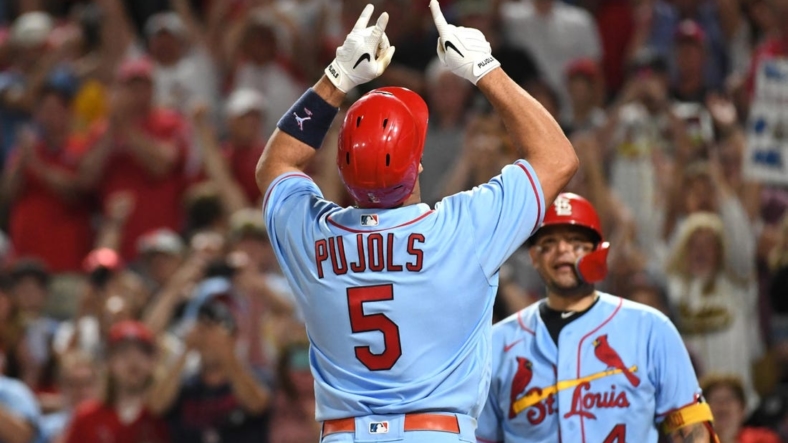 Albert Pujols moved into a tie for fourth place all-time with his 696th homer, a game-tying two-run shot in the sixth inning, and Nolan Arenado hit a three-run double in the ninth Saturday as the visiting St. Louis Cardinals downed the Pittsburgh Pirates 7-5.

With the game tied 4-4 in the ninth against Pirates reliever Wil Crowe (5-9), Yadier Molina singled up the middle and was replaced by pinch-runner Lars Nootbaar, who went to third on Paul DeJong’s single to shallow right.

Brendan Donovan grounded out, and Nootbaar was thrown out at home on Corey Dickerson’s fielder’s choice. Paul Goldschmidt walked, and then Arenado cleared the bases to make it 7-4.

Pujols was 3-for-4 and added an RBI single in the eighth, and Donovan homered for the Cardinals (82-58), who had lost two straight.

Giovanny Gallegos (3-5), the Cardinals’ fourth pitcher, worked a scoreless eighth. Ryan Helsley gave up Bryan Reynolds’ RBI single in the bottom of the ninth but picked up his 15th save.

Jack Suwinski, Rodolfo Castro and Oneil Cruz homered for the Pirates (51-87), who have lost seven of nine.

Castro hit his seventh homer, to left, in the first for a 1-0 Pittsburgh lead.

In the second, Ke’Bryan Hayes walked ahead of Suwinski’s 15th homer, a shot to right, giving the Pirates a 3-0 lead.

St. Louis cut it to 3-1 in the fifth when Donovan launched his fourth homer, to right.

In the sixth, Tyler O’Neill led off with a doubled to left-center. An out later, Pujols banged his 17th homer of the year, to left, to tie it 3-3. That tied him with Alex Rodriguez for fourth all-time in the major leagues.

Against JoJo Romero in the seventh, Cruz led off with his 14th homer, to right, to give Pittsburgh a 4-3 lead.

In the eighth against Robert Stephenson, Nolan Gorman doubled to right with two outs and scored on Pujols’ single to center for a 4-4 tie.