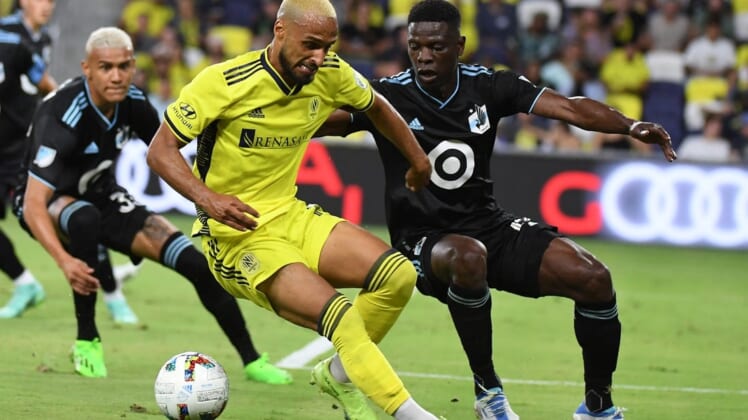 Alan Benitez scored the tiebreaking goal, and first of his career, in the 75th minute, and Minnesota United FC set a single-season club record with its sixth road victory, beating struggling Nashville SC 2-1 on Sunday night.

After Nashville star Hany Mukhtar leveled the match with his 14th goal in the 61st minute, Minnesota woke up its own attack.

On a play started by Emanuel Reynoso down the near sideline, the ball found Joseph Rosales, who crossed through some modest net-front traffic, and on to the foot of Benitez, who calmly converted his milestone goal in just the fourth match he played for Minnesota (11-9-5, 38 points), which is amid 4-1-0 road stretch.

Meanwhile, Nashville (8-9-9, 33 points), outshot Minnesota 21-10 overall and 8-4 on-target, but fell to 0-3-3 since beating Seattle on July 13. That was also the last time Nashville won a match at home, where it just dropped back-to-back games for the first time in club history — and is 1-3-2 since going 24 straight games there without a defeat.

Following a feeling-out period, the intensity picked up after the first 10 minutes. Minnesota keeper Dayne St. Clair (seven saves) made three key stops on chances from Nashville’s Randall Leal, C.J. Sapong and Shaq Moore within a two-minute stretch. Amid that Nashville surge, United’s Luis Amarilla hit the post in the 12th minute.

Minnesota, though, scored just before the half-hour mark.

Off a rare poor decision by Nashville’s Walker Zimmerman, the star defender casually chipped the ball toward midfield, but onto Minnesota. The ball eventually found Franco Fragapane, who raced into the left side of the box and converted quite easily for his fifth goal.

St. Clair made another huge, diving save on Zimmerman’s header during first-half stoppage time to preserve the lead for Minnesota.

Nashville kept the pressure coming out of the gate in the second half, and finally converted just past the hour mark through Mukhtar. Nashville played without Teal Bunbury, who has goals in four consecutive MLS games, but is dealing with a groin issue.