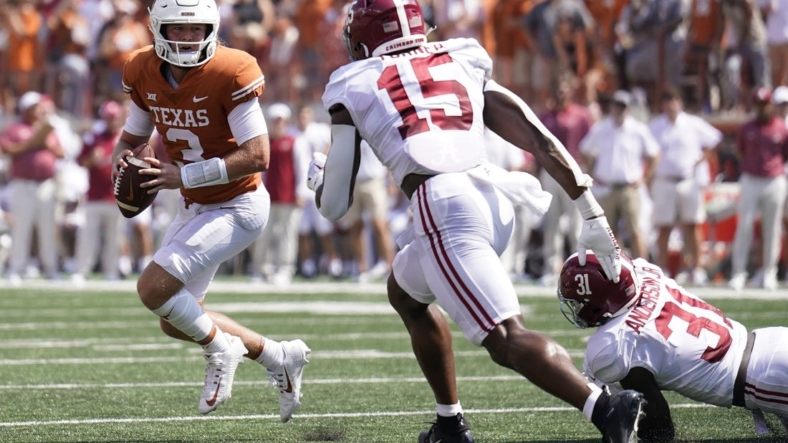 Alabama linebacker Dallas Turner defended his hit that injured Texas quarterback Quinn Ewers, saying Tuesday it was a clean blow and he was stunned to be penalized.

Ewers threw the ball out of the end zone late in the first quarter during Saturday’s game against Alabama and Turner’s ensuing hit drove the quarterback’s left shoulder into the turf. Ewers exited with a sprained left clavicle and published reports indicate he will miss approximately four to six weeks.

“Honestly, it was no intent to hurt Quinn Ewers, honestly,” Turner told reporters on Tuesday. “I feel like he’s a good quarterback, and I hope he has a very speedy recovery. But it was just a QB hit, and that’s how I looked at it. No intent to hurt him or nothing like that. No dirty play, nothing.”

Ewers was off to a hot start, hitting 9 of 12 passes for 134 yards before departing due to the injury. Texas finished the drive with a touchdown and eventually lost the game 20-19.

The biggest shock to Turner was seeing the penalty flag on the turf.

“Yeah, I was very surprised to see a flag after that,” Turner said. “But that’s football. Just gotta adjust to the game and just learn from it.”

Turner has six tackles in two games this season. A year ago, he excelled with 8.5 sacks as a freshman.