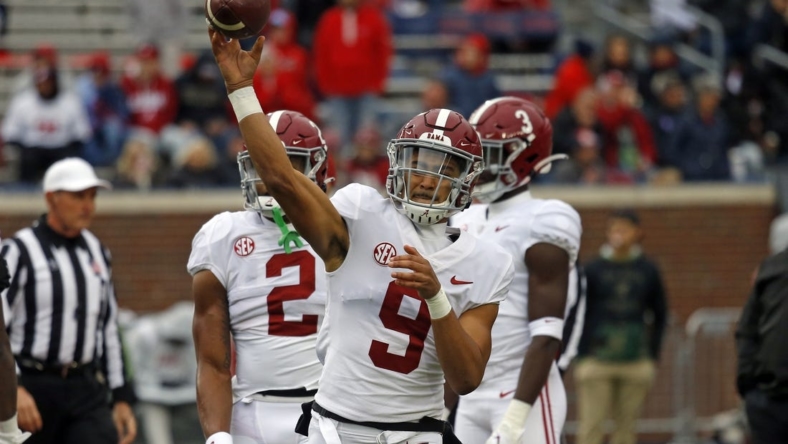 Will Reichard kicked two of his three field goals in the fourth quarter, Alabama’s defense stopped Ole Miss in the red zone late, and the No. 9 Crimson Tide held on for a 30-24 victory over the No. 11 Rebels in Oxford, Mississippi, on Saturday.

The Crimson Tide (8-2, 5-2 SEC) trailed 10-0 but fought back behind Bryce Young’s touchdowns to Cameron Latu, Jermaine Burton and Ja’Corey Brooks.

Ole Miss drove to the Alabama 14-yard-line, but on 4th-and-16 from the 20, defensive back Brian Branch broke up a pass in the end zone intended for Jonathan Mingo to seal the win with 46 seconds left.

The victory delivered the SEC West crown to LSU, which defeated Alabama and Ole Miss to earn a trip to Atlanta for the conference championship game.

Young was 21 of 33 for 209 yards and crafted his first 3-TD game since Sept. 24 against Vanderbilt when he tossed four. Jase McClellan rushed for 84 yards on 19 carries.

Jaxson Dart was 18 of 31 for 212 yards with a TD to Mingo. Malik Heath caught six passes for 123 yards, while Quinshon Judkins ran for 135 yards on 25 carries and tallied twice, giving him a school-record 15 rushing TDs in a season.

After Judkins shoved his way in for a score in the first quarter, the Rebels’ offense moved 32 yards to set up Jonathan Cruz’s 22-yard field goal and a 10-0 lead.

Young put the Crimson Tide on the board at 8:55 by firing a 19-yard strike to Burton. But Otis Reese’s fumble recovery at midfield led to another Ole Miss score, as Judkins — from the wildcat formation — punched it in from a yard out for a 17-7 lead.

Alabama’s Terrion Arnold recovered a fumble at the Rebels 23, and Young found Latu for an 8-yard score with eight seconds left for a 17-14 Ole Miss halftime lead.

After Reichard tied it with a 39-yard field goal, Dart zipped a 3-yard ball to Mingo for a 24-17 advantage at 7:28. Young rolled out and tossed a 5-yarder to Brooks to knot the contest at 24 after three quarters.

Reichard connected again, from 23 yards, the visitors’ first lead with 11:19 left and added another from 49.