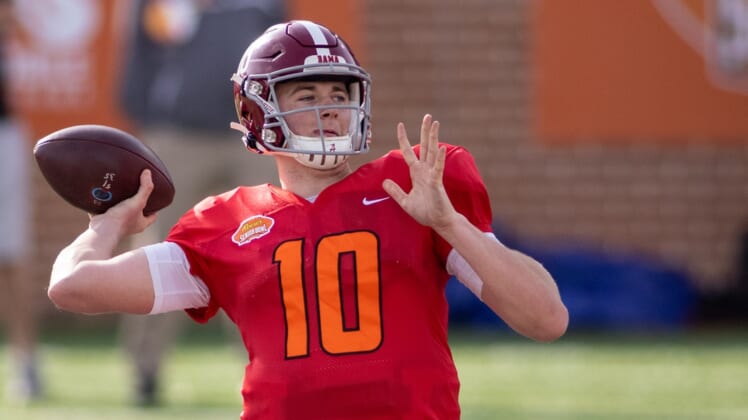 Alabama quarterback Mac Jones is in danger of missing Saturday’s Senior Bowl after injuring his left ankle during Thursday’s practice at Mobile, Ala.

Jones, a Heisman Trophy finalist, said he wasn’t sure he would be able to play in the contest.

“I’m not going to go out there if I’m not 100 percent,” Jones said after the practice. “It’s not fair to my teammates to not be 100 percent and try and play and not play well. I’m going to make the decision, but hopefully I can get treatment and see how it feels.”

Jones is still nursing a right leg injury from the College Football Playoff title game victory over Ohio State earlier this month. He immediately knew there was an issue with his left leg when he sustained the injury.

“I kind of rolled my ankle a little bit. I was more worried about my right leg, but now my left leg is a little hurt,” Jones said. “I didn’t get to finish (practice), but I don’t want to risk it at this point. Get treatment and figure out how I feel.”

Jones is on the American Team. The other quarterbacks on the squad are Kellen Mond of Texas A&M and Jamie Newman, who played for Wake Forest before transferring to Georgia and then opting out of the 2020 season.

The team is being coach by the Carolina Panthers’ staff. Head coach Matt Rhule said Jones was having a highly productive practice prior to the injury.

“He went for a while there, started limping at the end, so I just said, ‘Hey, why don’t you go see the trainer?'” Rhule said. “Last thing I want to do is see the kid get banged up. He was having a hard time. I thought he had a good day, just had to get it himself healed up.”