The injury occurred early in the second quarter with 13:49 left before halftime. Allen sacked Miami quarterback D’Eriq King for a loss of three yards. Allen also forced a fumble on the play, which he recovered.

However, Allen appeared to suffer a foot injury on the play. He was attended to by trainers and had to be carted off the field to the locker room for further evaluation. Allen did not return to the game. 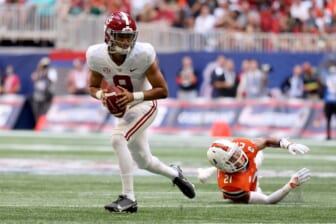 “Chris Allen’s got a pretty significant foot injury, and they’ll further evaluate,” Saban told reporters after the game. “But it looks like he may be lost for the season.”

Allen led the Southeastern Conference in tackles for loss (13) and totaled six sacks in 2020. He finished No. 1 Alabama’s 44-13 rout of Miami with three combined tackles, one tackle for loss, a sack and forced fumble.