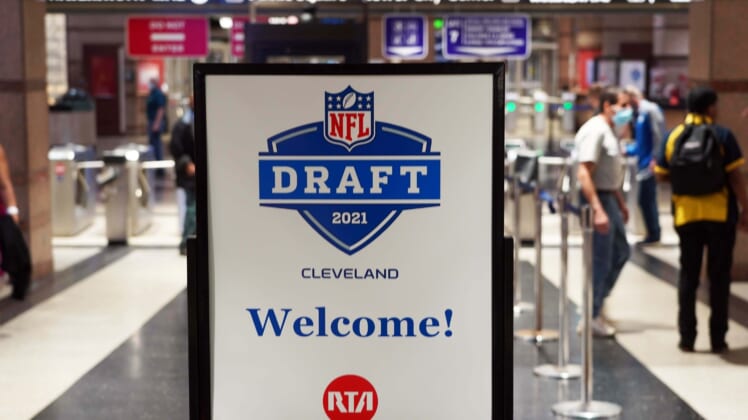 Perhaps only a transcendent quarterback class could shift the spotlight away from Alabama football when the 2021 NFL Draft opens Thursday night in Cleveland.

As is customary in the NFL draft, the quarterback in the conversation is rising as draft night approaches. Oddsmakers project Jones to be the No. 3 overall pick of the San Francisco 49ers when only six weeks ago he was widely projected to be selected around No. 20.

Saban said last month teams began showing greater interest in Jones late last season and after the national championship game. In conversations with teams, Saban reminds them where Jones started — on the scout team and then behind a slew of talented players, including projected 2021 NFL starters Jalen Hurts (Eagles) and Tua Tagovailoa (Dolphins). And, perhaps most importantly, of Jones’ perseverance in an environment where the transfer portal has become an instant gratification eject button.

“I think that the team that picks me is going to realize they don’t have to worry about me being the first guy in and the last guy out,” Jones said. “I’m going to sit and watch as much film as I can and do all the right things. And then obviously the tape speaks for itself.”

Saban has had 96 players drafted since he became coach at Alabama, including four first-round picks in 2020. Overall, Saban has produced 35 first-round picks between his time at LSU and Alabama. Tagovailoa was the fifth overall pick in 2020 — one of four Alabama players in the top 15 — and sat early as a Miami rookie while recovering from hip surgery.

He’s expected to start from the jump this season and many pundits project Waddle or Smith to join him in South Beach. Smith’s size has been a pressing question in scouting circles and he officially weighed 166 pounds at Alabama’s pro day. Waddle is 5-10, 180, but is one of the fastest players in the draft.

They’re both expected to be on the board when the Dolphins pick sixth overall.

“You always evaluate,” Dolphins general manager Chris Grier said. “You always talk about size. But each player is their own case. Those guys have shown they’ve been good players at a high level of play in the SEC. That goes for a lot of players around the country. I just think the game has changed and these smaller players are given more room and freedom to showcase their talents.”

In 13 games last season, Jones threw for 4,500 yards, 41 touchdowns and only four interceptions. Some argue he was a product of a system that thrived with a rugged offensive line and elite playmakers everywhere.

Harris is the top-ranked running back on the board of many teams, while some are leaning toward Clinton Portis clone Travis Etienne (Clemson).

“He’s got great size. He’s a really good receiver. He’s instinctive as a runner. He’s tough,” Saban said, calling Harris exceptional. “He’s hard to tackle. He kind of gets better as the game goes on.”

Miami’s 2004 draft class was a headliner even without a quarterback in the mix.

Odds from FanDuel set the over-under on Alabama players drafted in the first round at 5.5.

Five quarterbacks are projected to be selected in the top half of the first round.

If the Jaguars select Lawrence first overall, he’ll be the 26th quarterback to go No. 1 since the 1970 AFL-NFL merger. Quarterbacks have gone first each of the past three drafts.

Only one time in draft history (2018) were four quarterbacks selected in the top 10, and never with picks 1-4. The Falcons hold the fourth overall pick and choosing an heir apparent to Matt Ryan is under consideration.

Atlanta could also fetch additional picks by dealing the No. 4 pick to a quarterback-hungry team such as the Patriots, Denver Broncos or Chicago Bears.

The record for quarterbacks drafted in the first round is six, set in 1983 by the ballyhooed crop of John Elway, Jim Kelly, Dan Marino, Todd Blackledge, Tony Eason and Ken O’Brien.

Dallas Cowboys owner Jerry Jones on Tuesday wondered aloud if his team would have a shot at the top defensive players in the draft and hinted none might go in the nine picks before his team is on the clock.

Not since cornerback Champ Bailey was picked seventh by Washington in 1999 has a draft gone beyond No. 7 without a defensive player selected.

The Jets, Patriots, Vikings, Packers, Cowboys and Ravens all have 10 picks.

Don’t look for the Houston Texans on Thursday. Their first-round pick went to the Dolphins in the Laremy Tunsil trade and new general manager Nick Caserio won’t have a pick until 67th overall barring a trade into the first two rounds.

The Chiefs, Rams and Seahawks are also without a first-round pick entering the proceedings.