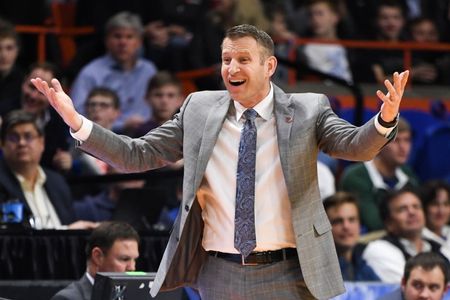 Oats divulged his personal coronavirus experience after a reporter asked him at the school’s basketball media day if he could be affected by the positive tests of Saban and Byrne.

Oats, 46, said he believes he contracted the virus from his teenage daughter.

“She was probably out and about, and had it before I did,” Oats said. “When I got it, very asymptomatic. I wouldn’t have known I was sick if they weren’t testing healthy people. Because the minor symptoms I had, I kind of just worked through and didn’t even realize it was COVID.

“I had a dull headache for a few days, which literally I worked right through until I got tested and realized it. I had the headache when I was out of the state. When I got back in the state, I tested before I could work with the team and that day I got back, the symptoms were gone and I tested positive.”

Oats said he was surprised to hear the news on Saban and Byrne — particularly with the No. 2 Alabama football team slated to play No. 3 Georgia on Saturday.

“Maybe I should’ve encouraged them to get it back with me in July, and they wouldn’t be worried about it right now,” Oats said. “I don’t have to worry about being around them, personally, myself. And I wasn’t around them.

“I think it’s unfortunate. I mean, shoot, it’s maybe the biggest football game in the SEC this year and the best coach in the SEC is maybe not gonna be able to coach the game. That’s unfortunate for everyone involved, in my opinion.

“I don’t know what to say other than that. Hopefully they’re both, as far as I’ve heard, fairly asymptomatic, I think. So hopefully they get through it here quickly and get back to doing their jobs.”

He was hired after guiding Buffalo to victories in the NCAA Tournament in each of the previous two seasons, and produced a program-best 32-4 mark during the 2018-19 season.