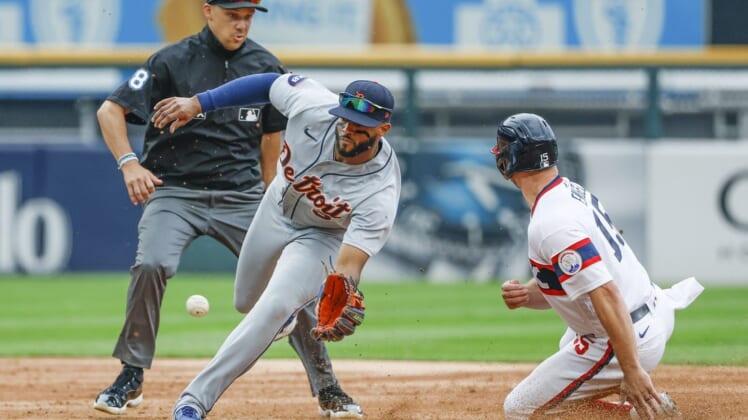 AJ Pollock doubled, homered and scored twice to help the host Chicago White Sox to a 5-3 win against the Detroit Tigers and a three-game sweep on Sunday afternoon.

Andrew Vaughn also homered and drove in two runs, and Eloy Jimenez and Jose Abreu had two hits each for the White Sox.

Harold Castro homered and Javier Baez had two hits for the Tigers, who have lost seven in a row.

Lynn struck out the side in the second inning, but got into trouble after getting the first out in the third.

Akil Baddoo reached on an infield single and took third on a single to right by Riley Greene.

Lynn then bounced a pitch that got away from catcher Seby Zavala, allowing Baddoo to slide into home under Lynn’s tag for a 1-0 lead.

Lynn got the second out of the inning, but Baez followed with a double to right field to score Greene and make it 2-0.

Pollock went deep to lead off the bottom of the inning and trim the lead to 2-1.

The White Sox moved ahead with two runs in the fifth.

Pollock doubled to lead off the inning and Jimenez followed with a one-out double to score Pollock with the tying run.

A single by Abreu moved Jimenez to third, and he scored on a fielder’s choice ground out by Vaughn for a 3-2 lead.

Jimmy Lambert pitched the seventh and got the first out of the eighth for the White Sox before left-hander Jake Diekman came on and finished up the inning with two strikeouts.

The White Sox padded their lead in the bottom of the eighth when Vaughn homered to lead off the inning and Josh Harrison scored from first on a double by Zavala to make it 5-2.

Those runs provided some cushion for Kendall Graveman, who gave up a solo home run to Castro in the ninth before notching his sixth save.