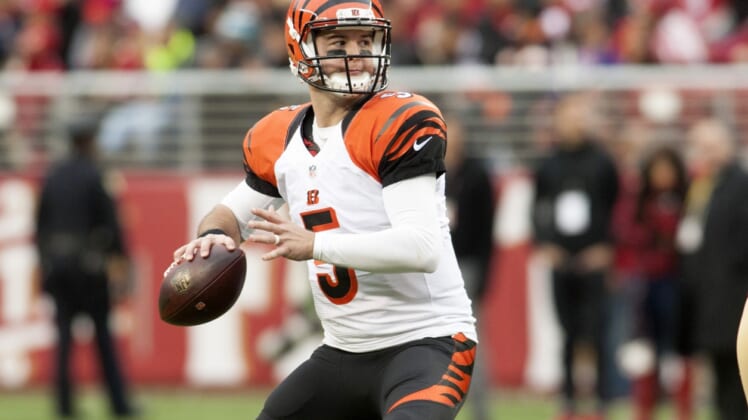 When the Cleveland Browns and Cincinnati Bengals failed to execute a trade, the Browns stuck out the remainder of 2017 with DeShone Kizer instead of AJ McCarron.

The end result was the second 0-16 season in league history. The NFL world can only wonder whether McCarron would’ve stopped the franchise from joining the club, and the Bengals backup believes he would’ve put a notch or two in the win column.

While appearing on WNSP 105.5 (h/t Creg Stephenson, AL.com), McCarron said he wanted the opportunity to lead the Browns, who are coached by his former offensive coordinator Hue Jackson.

“I think I would have had some success playing for Hue. I would have loved the opportunity to go up there and get them a win, more than one win. As a competitor, that’s all you can ask for.”

However, the paperwork mishap kept McCarron on the bench in Cincinnati. The Bengals missed the postseason at 7-9, and he only attempted 14 passes all season.

Meanwhile, the Browns continued riding Kizer, who could never quite finish off a victory. Among other games, Cleveland lost to the Aaron Rodgers-less Green Bay Packers in overtime and the Ben Roethlisberger-less Pittsburgh Steelers in Week 17.

So yes, it’s reasonable to think McCarron would’ve been a little more successful than the rookie. That’s not a high bar, though the Browns don’t expect greatness anyway. They might have appreciated 1-15.

Pending the result of an arbitration hearing that will determine if he’s a restricted or unrestricted free agent, McCarron could be free to sign with a franchise that will provide him a real chance to start.

Considering his desire to join Cleveland in 2017, it’s clear he cares more about that opportunity than if the team is already built for success.