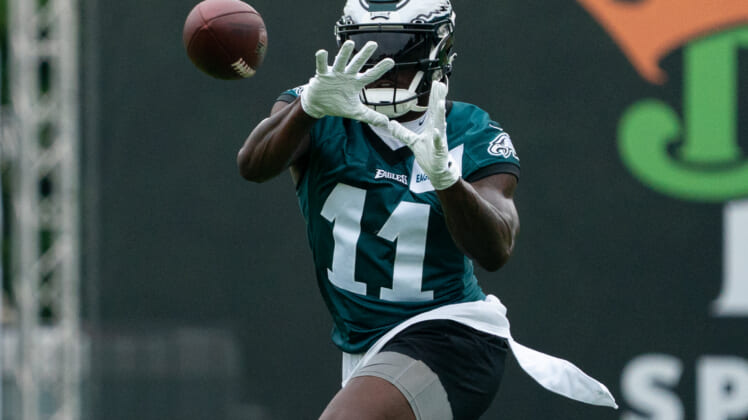 The NFL community was caught by surprise during the first night of the 2022 NFL Draft when the Tennessee Titans traded Pro Bowl wideout A.J. Brown to the Philadelphia Eagles.

Just three years after the team selected Brown in the second round in 2019, the top wide receiver on a team that didn’t have depth at the position was gone. The team essentially replaced him with a younger, cheaper version in rookie first-round pick Treylon Burks out of Arkansas.

Once he landed in Philly, Brown quickly agreed to a contract extension worth $100 million over four years. As of now, Brown’s contract has him as the fifth-highest paid at his position in average value per season.

While players are up for contract extensions every year, including a few other receivers from Brown’s draft class who recently signed extensions. In hindsight, we can see Brown’s situation was unique to his fellow receivers, but only because Brown was the only one of the quartet who was traded.

With Deebo Samuel being the most recent one to sign his extension, Brown quickly took to Twitter shortly after the agreement was announced, basically to call out his former team for being cheap.

Brown’s clearly suggesting the Titans weren’t willing to pay up. Yet, the other three receivers who were in a similar position as him all got paid by their original teams. Clearly other teams valued Brown, but not the Titans. Now they’re paying the price.

Or maybe not. Maybe it will work out for everyone like the Stefon Diggs trade, where the Minnesota Vikings lucked into Justin Jefferson. Will the Titans be as lucky with Treylon Burks? If not, this will be remembered as a bad trade.