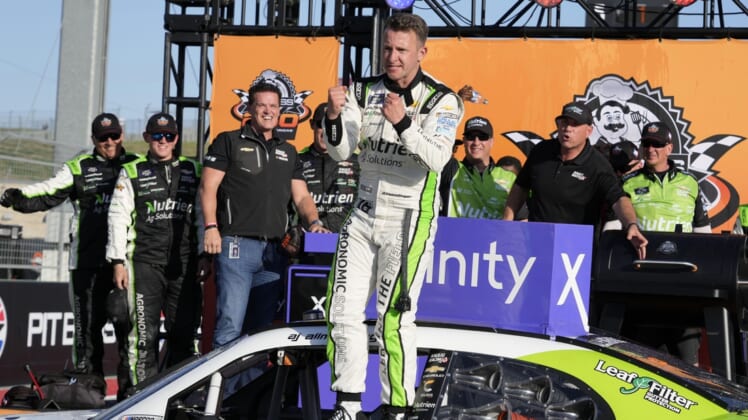 AUSTIN, Texas — AJ Allmendinger was fast and agile when he needed to be Saturday afternoon in negotiating the famed Circuit of The Americas and reminding the field just why he’s considered one of NASCAR’s road course superstars.

Allmendinger’s No. 16 Kaulig Racing Chevrolet took the checkered flag by 2.039 seconds over Austin Hill’s No. 21 Richard Childress Racing Chevrolet in the first road course race of the year. It was the 40-year-old veteran’s first NASCAR Xfinity Series win of the 2022 season and 11th of his career. He has seven road course wins on six different road course tracks, most in the series.

He led early and he led late, just when he needed to, holding off the field on two late and dicey race restarts and controlling the race the final 14 laps en route to the checkered flag.

With their work, Allmendinger, Hill, Gragson and Mayer are now eligible to win a $100,000 bonus next week in the Dash 4 Cash sweepstakes opener at Richmond (Va.) Raceway. The top finishing driver among them in the ToyotaCare 250 will take the check, courtesy of sponsor Comcast.

“I told myself yesterday, I was not happy with where I put ourselves,” said Allmendinger, who qualified fourth.

“Honestly, all these men and women here at Kaulig Racing between the Cup side of it and the Xfinity side of it, they don’t sleep during the week. They’re busting their tails, and that’s why I’m so fricking hard on myself sometimes because they deserve to win more than anybody here. And I just want to do it for them. Thankfully, we got it done today,” Allmendinger added.

It was not easy. Pole-winner Ty Gibbs and fellow NASCAR Cup Series drivers Ross Chastain and Custer joined Allmendinger at the front of the field for most of the early going. Gibbs and Chastain exchanged the lead with Allmendinger, but both ultimately suffered setbacks during the course of the 46-lap race around the 3.41-mile, 20-turn circuit.

Gibbs’ Toyota sustained a flat tire, and he was well back in the field (36th place) after he was forced to pit during a green flag run. He recovered to finish 15th.

Chastain ran among the front pack all the way until the end of the race when he was collected in an aggressive pack on the final race restart with seven laps remaining. He finished 17th.

Myatt Snider finished sixth in a final-lap duel with Mayer. Brett Moffitt finished seventh with Jade Buford, Miguel Paludo and Sheldon Creed — who won the pole position for the NASCAR Camping World Truck Series race earlier in the day — rounded out the top 10.

Hill was especially encouraged because he was able to keep Allmendinger honest in the closing laps.

“All in all, it was a solid effort for our Global Chevy Camaro,” Hill said, adding, “I’ve always felt like I could get around road courses. I felt like I proved it last year in the trucks winning at Watkins Glen, and it just kind of built the momentum and the confidence going forward into this year that when we come to road courses, we can get the job done.

“I guess A.J. was just a little bit better than us, because I felt we had a really good car, but this shows we can run with AJ.”

With the showing at COTA, Gragson holds a single-point lead over Allmendinger in the Xfinity Series driver standings with Gibbs third, 31 points back.