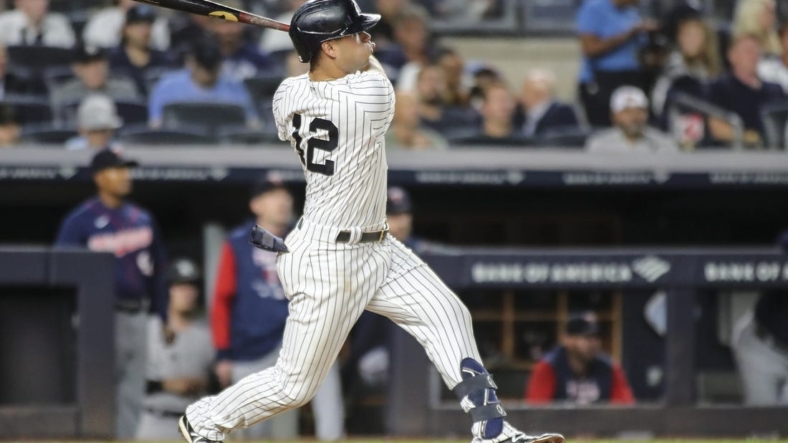 Injuries created a vastly different lineup for the New York Yankees in their Wednesday doubleheader.

The Yankees might be depleted again but are seeking a four-game sweep of the Twins and another home victory on Thursday night.

Including their three wins in the 2019 American League Division Series, the Yankees (83-54) are on a 10-game home winning streak over the Twins (68-67) since May 2019. Including postseason contests, New York is 24-2 in its past 26 home games against Minnesota.

While Aaron Judge hit his 55th homer of the season in the opener of the doubleheader, others stepped up for New York on a day when Giancarlo Stanton (foot), DJ LeMahieu (toe) and Josh Donaldson (paternity list) did not play.

Rookie Oswaldo Cabrera snapped a 0-for-25 skid with a game-ending single in the 12th inning of a 5-4 win in the opener. Isiah Kiner-Falefa played third base in place of Donaldson and hit a grand slam in a 7-1 win in the nightcap after contributing the tying hit in the opener.

“These are capable guys and opportunity knocks,” Yankees manager Aaron Boone said Wednesday morning. “I felt like we were in these (injury) situations a lot in 2019. These are talented players that have a chance to come up and do something to help us win important games.”

Besides attempting to reverse their struggles against the Yankees, the Twins hope to stop their slide before hosting the AL Central-leading Cleveland Guardians this weekend.

Minnesota scored 34 runs in a five-game winning streak Aug. 26-30. Since then, the Twins have 20 runs while dropping six of seven.

Carlos Correa and Jose Miranda homered in the doubleheader for the Twins, who struck out 28 times on Wednesday. Minnesota is tied with the Chicago White Sox for second in the AL Central, two games behind Cleveland.

“I want to beat those teams,” Twins manager Rocco Baldelli said. “I don’t want to be sitting here talking about how good the Yankees are anymore or the Astros or the Dodgers or any of those teams. I want to talk about our guys.”

Sonny Gray (7-4, 3.10 ERA) is set to start for Minnesota on Thursday. The right-hander exited his Saturday start after four innings against the host White Sox due to right-hamstring tightness. He is set to make his first appearance in New York since being traded by the Yankees to the Cincinnati Reds following the 2018 season.

New York is expected to activate Nestor Cortes (9-4, 2.68) from a short injured-list stint to start on Thursday. Cortes has been sidelined due to a strained left groin. He last pitched Aug. 21 when he allowed one run and three hits in six innings of a no-decision against the visiting Toronto Blue Jays.

Cortes endured one of his worst starts in Minnesota on June 8, when he was tagged for four runs and seven hits in 4 1/3 innings during an 8-1 loss. The left-hander is 2-1 with a 4.32 ERA in four career games (two starts) against the Twins.