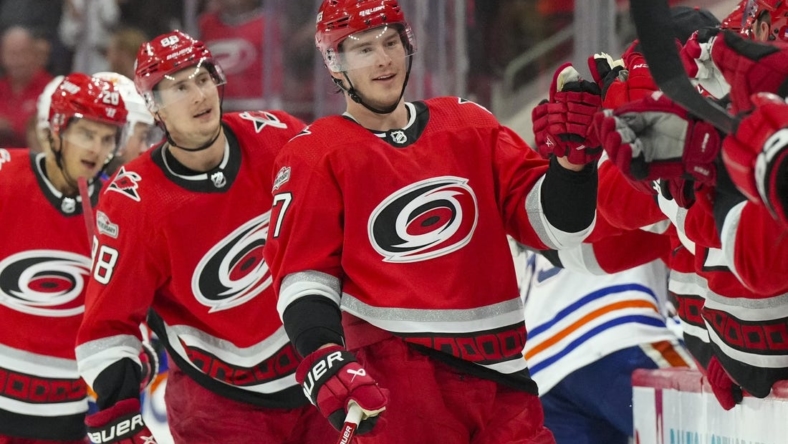 The Colorado Avalanche have plenty of offensive firepower — even with injuries — but their next opponent has one of the hottest goal scorers in the NHL.

In the Carolina Hurricanes’ first 14 games, Andrei Svechnikov already has notched two hat tricks, including one Carolina’s 7-2 win over the Edmonton Oilers on Thursday night. Each of his three-goal games have come against Edmonton.

Colorado has the job of slowing down the 22-year-old Svechnikov, the league’s third-leading scorer Saturday night when the Hurricanes visit Denver.

Carolina’s victory on Thursday ended a two-game skid and it came with backup goaltender Pyotr Kochetkov stopping 20 shots in his season debut. Kochetkov got the start because starter Frederik Andersen was out with a lower-body injury and will remain out until at least Monday.

Kochetkov won all three of his starts for the Hurricanes last year and appeared in four playoff games.

“He played great for us last year,” Jordan Martinook said. “We know what he is.”

Carolina knows what Svechnikov brings to the game as well. He is in his fifth NHL season, all with the Hurricanes, and his third goal on Thursday night gave him 100 in 297 career games.

Svechnikov has 11 goals and is on pace to surpass last year’s career high of 30 goals in 78 games.

“He has been good all year,” Hurricanes coach Rd Brind’Amour said. “We need it. We have some key guys that aren’t in our lineup who score goals. So we’re counting on everyone else to chip in and he has been leading the charge.”

The Avalanche are also dealing with injuries, and Thursday night suffered another in their 5-3 win over Nashville. Shane Bowers, a 2017 first-round pick of Ottawa that Colorado acquired in the Matt Duchene trade, made his NHL debut but left with an upper-body injury in the first period.

That added to the list of players sidelined, which include forwards Gabriel Landeskog, Valeri Nichushkin and Darren Helm and defenseman Bowen Byram. Helm has yet to play this season and coach Jared Bednar said Friday that Helm underwent another surgery last week.

Colorado is hopeful that defenseman Sam Girard, who is listed as day to day, can return against the Hurricanes.

Despite the injuries, the Avalanche have won their last three games and can build momentum on their current three-game homestand. Colorado dealt with injuries last year on its way to the Stanley Cup title and has the experience to get through a tough schedule to begin the season.

“I think it’s next man up mentality,” said Logan O’Connor, who had two goals in Thursday’s win. “As cliche as that may be, it’s pretty truthful and everyone just has to elevate their games in different areas.

“I think we have to be that much sharper in our details and our structure and I think we’ve seen that over the last couple of games. We’ve definitely focused on things defensively and the little nuances of the game that I think have been effective for us with a little bit of a thinner lineup.”