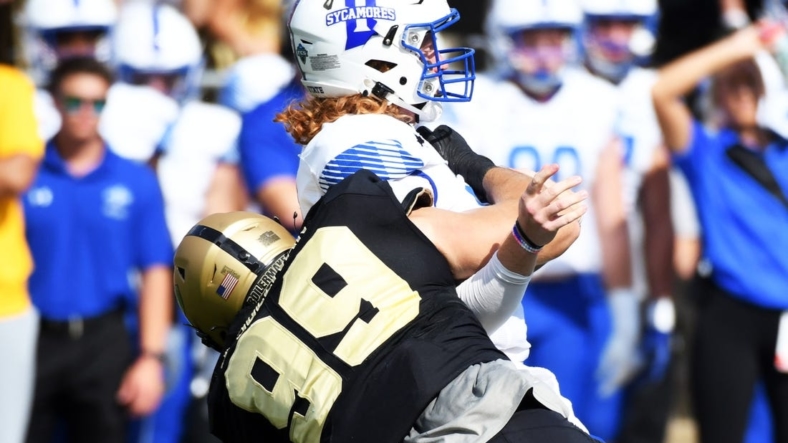 Aidan O’Connell connected with Charlie Jones on three touchdown passes as part of a four-touchdown performance, and host Purdue cruised past Indiana State 56-0 in West Lafayette, Ind., on Saturday.

O’Connell needed only one half of play to stake Purdue (1-1) to a 35-0 lead, completing 17 of 19 passes for 211 yards. Jones finished his day with nine catches for 133 yards. Safety Cam Allen returned a third-quarter interception 65 yards for touchdown that put Purdue up 49-0.

Purdue got a short field on its opening possession after Sanoussi Kane forced a fumble that Allen recovered at the Indiana State 30. The Boilermakers took just four plays to cash in on a 4-yard King Doerue touchdown run.

Purdue then put together a six-play, 58-yard scoring drive that covered 2:09 to go up 14-0 on O’Connell’s 7-yard scoring pass to Jones.

The Boilermakers scored again three minutes later on a 43-yard drive, culminating in an O’Connell to Paul Piferi 26-yard pass.

The Sycamores answered with two drives deep into Purdue territory, but both possessions ended in turnovers — the first on downs after a Purdue goal-line stand and the second a Jamari Brown interception.

Dylan Downing had a 1-yard rushing touchdown and Devin Mockobee added a 14-yard touchdown run to complete the scoring.