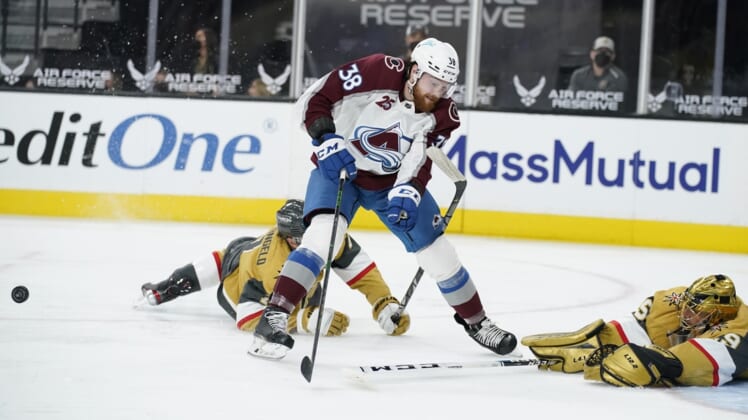 William Karlsson set a franchise record for the fastest goal to start a game as the Vegas Golden Knights extended their franchise-record winning streak to 10 games with a 5-2 victory over the Colorado Avalanche on Wednesday night in Las Vegas.

Karlsson’s goal after 10 seconds set the tone. Vegas’ Max Pacioretty had two goals and an assist, Mark Stone had a goal and two assists.

Jonathan Marchessault also scored a goal for the Golden Knights (35-11-2, 72 points) who also broke a tie with the New York Islanders for the longest win streak in the league this season.

Marc-Andre Fleury made 35 saves as Vegas extended its West Division lead to six points. It was the 488th career victory for Fleury who moved with one of Roberto Luongo for third place on the all-time wins list.

Devon Toews and Ryan Graves scored goals for second-place Colorado (31-12-4, 66 points). Nathan MacKinnon added an assist to extend his point streak to 15 games, the longest of his career and also in the NHL this season.

Devan Dubnyk finished with 21 saves as Colorado dropped its third straight game, the team’s longest losing streak of the season.

Vegas jumped on top when Karlsson picked up an outlet pass from Alex Pietrangelo that went through the skates of defenseman Samuel Girard near center ice and then broke in and beat Dubnyk with a backhand shot for his 13th goal of the season.

The score shattered the team record for fastest goal to start a game that Karlsson also scored 14 seconds into a game against San Jose on Nov. 24, 2018.

Toews tied it midway through the period with his seventh goal of the season, knocking in a rebound from the left side of the goal.

The Golden Knights established a 2-1 lead in the second period on a power-play goal by Pacioretty on a left point shot that eluded a surprised Dubnyk at 9:36. Stone’s 19th goal of the season, a shot from behind the net that banked in off Dubnyk’s back, made it 3-1 at 14:39.

Colorado closed within 3-2 at the 17:06 mark of the middle period. Graves took a MacKinnon pass and fired a shot through traffic for his second goal of the season.

Pacioretty then put Vegas back up by two goals 55 seconds into the third when he finished a two-on-one breakout with Stone for his 24th goal of the season.

Colorado pulled Dubnyk for an extra attacker with 4:21 remaining, and Pacioretty missed a chance for a hat trick when his sharp-angle backhand try went wide of the empty net with 3:28 to go. Marchessault then sealed the win with an empty-netter with 1:19 left.