Against Colgate, Wisconsin likely to have home crowd on its side 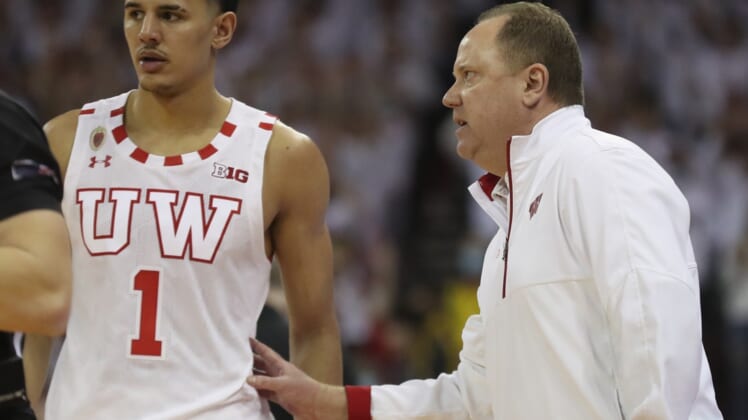 Wisconsin essentially will have a home-court advantage as the third-seeded Badgers look to reverse a recent slide when they take on No. 14 Colgate in the first round of the NCAA Tournament on Friday at Milwaukee.

Wisconsin (24-7) has lost consecutive games for the first time this season. The Badgers fell in their first game of the Big Ten tournament to Michigan State after being upset at home by Nebraska to end the regular season.

The loss to the Cornhuskers cost the Badgers outright ownership of the regular season Big Ten title.

With Friday’s game just 80 miles down the road from Madison, the Badgers should enjoy a huge home-crowd advantage against the Raiders (23-11), who won the Patriot League tournament. The last time Wisconsin played at Milwaukee in the NCAA Tournament in 2014, it advanced to the Final Four.

“Again, you can wipe out all the 1 through 16s,” Wisconsin coach Greg Gard said. “I’ve been part of teams from 1 through 12, and you have to play well for 40 minutes. Nothing else is guaranteed.”

Johnny Davis, the Big Ten Player of the Year, struggled against Michigan State after limited practice time. Davis, who was injured on a flagrant foul in the loss to Nebraska, made just 3 of 19 shots in the loss to the Spartans, including 0 for 5 from 3-point range.

Wisconsin is first in the nation in fewest turnovers per game at 8.5. The Badgers, who shoot 74.2 percent from the free-throw line and have made 437 free throws to 330 by opponents, were just 12 of 21 in the loss to Michigan State.

Wisconsin will be playing in its 26th NCAA Tournament and fifth under Greg Gard, who was named Big Ten Coach of the Year. Last season, the ninth-seeded Badgers defeated North Carolina in the first round and then lost to eventual national champion, Baylor.

Colgate is playing in its third NCAA tournament in the past four years and fifth overall, but has yet to win a game.

“The Big Ten is one of the best basketball conferences, if not the single best conference, in the country,” Colgate coach Matt Langel said. “Wisconsin has veteran, experienced players. They are extremely well coached and very disciplined — a lot of things that we’ve tried to model our program after — team over self and super consistent game in and game out.”

The Raiders, who have five players averaging in double figures, are second in the nation in 3-point accuracy, shooting 40.3 percent from deep.

Senior guard Nelly Cummings averages 14.5 points per game, but is shooting just 31.3 percent over his last six games. Colgate lost all three games he missed in December with an injury.

The Badgers and Colgate have met just once before with Wisconsin winning an early season game at home 68-41 in the 2011-12 season.

The winner of Wisconsin-Colgate will face the winner of sixth-seeded LSU and No. 11 seed Iowa State on Sunday.