After ‘wasting’ a game, Hurricanes try to turn page vs. Jets 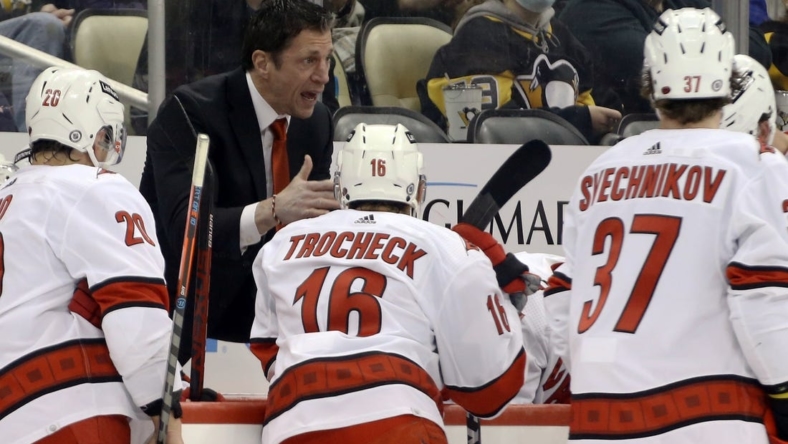 Most of the time, regardless of the result, the Carolina Hurricanes put a positive spin on how they’ve played.

That was far from the case their last time out, after a rare lackluster outing in a 2-1 overtime loss at Minnesota.

The Hurricanes will try to put the memory of that game behind them when they take the ice Monday night against the host Winnipeg Jets.

“The fact that we got a point out of that game is a miracle in my opinion,” Carolina coach Rod Brind’Amour said. “We were god-awful. When you have two or three guys playing and the rest were just going through the motions, that’s what you get.”

Brind’Amour might have a decision to make regarding goaltending. Pyotr Kochetkov has been strong since arriving from AHL affiliate Chicago because of an injury to top netminder Frederik Andersen.

Generally, the Hurricanes have rotated Antti Raanta and Kochetkov, so Monday would be Raanta’s turn.

Of more concern for Brind’Amour will be his skaters. The coach is not likely to stand idly by if the Hurricanes produce another subpar outing.

“That’s what you get in this league if you don’t have 20 guys (going strong),” Brind’Amour said after Carolina mustered 21 shots on goal and went 0-for-2 on the power play. “I hate wasting a game. That’s what we did. Turn the page.”

The Hurricanes will aim to revive their aggressiveness.

Despite the poor outing, the Hurricanes have created a reputation as a relentless team that puts opponents on notice. The Jets will be ready for that as they wrap up a three-game homestand.

“We’re looking forward to that challenge,” Jets center Adam Lowry said. “We know they have a lot of speed, they defend really well. They kind of roll all four lines and they come at you. It’s going to be a great test for us.”

The Jets have won eight of their last 11 and lost for just the second time this month on Saturday night. Yet compared to the Hurricanes, there was a different perspective from the Jets after the 3-0 setback to Pittsburgh.

“You have nights it just doesn’t go in,” Winnipeg coach Rick Bowness said. “That’s hockey. If we weren’t getting those chances, we’d be upset. We had enough chances to score.”

The Jets had a five-game home-ice winning streak snapped. Saturday also marked the first time they had been blanked this season.

Jets winger Nikolaj Ehlers will have surgery for a sports hernia in the coming days, a development announced during the weekend. It allows the Jets to add a short-term replacement to their roster rather than wondering when Ehlers, who hasn’t played since the second game of the season, might return.

“It was slower progress (than we anticipated), but we didn’t push it and we gave it a little extra time, hoping to try and avoid this (surgery),” Bowness said. “So it came to this.”

Ehlers scored 20 or more goals for Winnipeg in each of the past six seasons. He had 28 goals and 27 assists in 62 games last year.