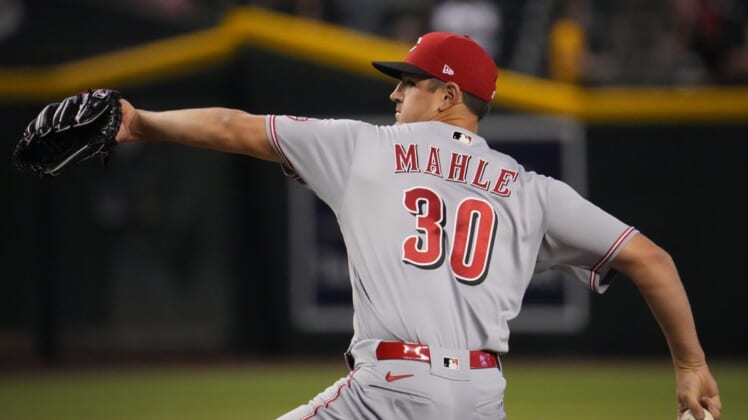 Albert Almora Jr.’s second hit of the game was a triple that drove in the winning run in the 12th inning, leading the Cincinnati Reds to a 5-3 victory over the Arizona Diamondbacks on Tuesday night in Phoenix.

Almora, who also doubled in the contest, led off the 12th with a triple into the right field corner off reliever Sean Poppen (1-1), knocking in designated runner Matt Reynolds. Almora scored an insurance run one out later on a single by Jonathan India.

Luis Cessa (3-1), who wild-pitched two runs across in the bottom of the 11th when Arizona was just one strike away from a win, picked up the victory. Joel Kuhnel earned his first major league save by throwing a 1-2-3 bottom of the 12th.

The game was scoreless after nine innings.

The Reds took a 1-0 lead in the 10th against reliever Mark Melancon when pinch hitter TJ Friedl doubled down the right field line, driving in Reynolds. Reynolds was pinch-running for Mike Moustakas, who started the inning as the designated runner at second and advanced to third on a groundout by Almora.

Arizona tied it in the bottom half when David Peralta doubled into the right field corner off reliver Alexis Diaz to drive in Ketel Marte, who began the inning as the designated runner at second.

Cincinnati took a 3-1 lead in the 11th on a two-run single by Kyle Farmer off reliever Ian Kennedy. But Arizona rallied to tie it with two outs in the bottom of the frame when Cessa, one strike from a win, issued two wild pitches to Josh Rojas allowing designated runner Jake McCarthy and Alek Thomas, who had singled, to score.

Cincinnati has won the first two games of the three-game series and has three straight victories overall. Arizona has lost four of its past five.