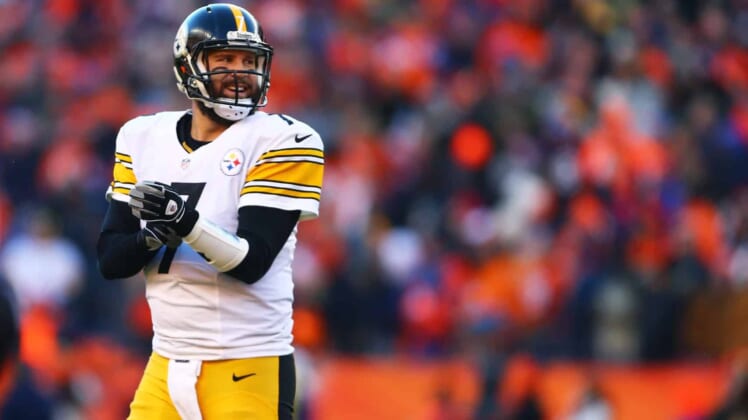 The Pittsburgh Steelers moved up in the draft to select Mason Rudolph out of Oklahoma State, and the notion here is that he will be the heir apparent to Ben Roethlisberger.

Now here’s the funny part. For some reason, Roethlisberger has a fire lit under his butt to keep playing.

“Well, that’s fine. He can do that,” Roethlisberger told the Post-Gazette on Tuesday about the rookie someday taking over as the Steelers starting quarterback. “But I plan on playing for three to five more years, depending on how the line goes and staying healthy, if I can stay healthy.

Big Ben was talking about retirement after the 2016 season, and he recently wouldn’t commit to playing beyond 2018. But all of a sudden he’s raring to go for another half decade or so.

“If he’s going to be their guy, that’s great, but in my perfect world it’s not going to be for a while.”

Needless to say, the competitive juices are flowing.

Roethlisberger had a very nice 2017 campaign, starting 15 games and leading the team to a 12-3 record in those starts. He completed 64.2 percent of his passes for 4,251 yards with 28 touchdowns and 14 interceptions. But he’s a guy who’s been ruminating on retirement for a couple years now and recently opened up about his concerns regarding concussions and CTE.

So with all that being said, it’s pretty interesting that he’s so keen on continuing to play for a long time, now that his team finally has a promising young passer waiting in the wings.