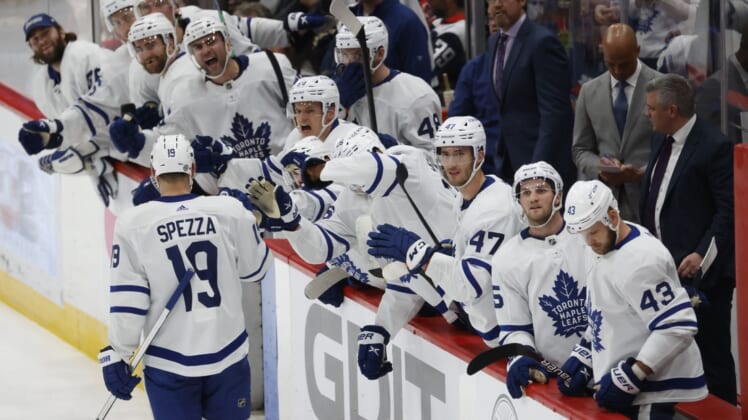 Following a difficult three-game road trip, the Toronto Maple Leafs get what appears to be a little bit of a breather on Tuesday.

The Maple Leafs return home to face lottery-bound Detroit, a team they have defeated three times in three tries this season.

Toronto encountered three playoff teams during its trip last week. The Maple Leafs were blown out 8-1 by the Tampa Bay Lightning on Tuesday then fell 3-2 to the Florida Panthers in overtime Saturday in the first game of a back-to-back. On Sunday, they pulled out a 4-3 shootout win at Washington.

The Maple Leafs (52-21-7, 111 points), who finish up the regular season with a home game against the Boston Bruins on Friday, are firmly in second place in the Atlantic Division. Their first-round playoff opponent will be determined this week.

Backup goal Erik Kallgren was up to the task in the seven-round shootout Sunday after surrendering eight goals to the Lightning in his previous start.

“It sure felt a lot better than the Tampa game,” he said of the seven-goal defeat. “I can’t change the past, so I just try to look at the video and learn from some mistakes I made and get better.”

Toronto’s top offensive threats didn’t score against the Capitals, but others picked up the slack. Ilya Lyubushkin, Ilya Mikheyev and Jason Spezza tallied the regulation goals, while Spezza and Alex Kerfoot found the back of the net in the shootout.

The Leafs trailed 3-1 through the third period. Mikheyev brought them within one goal at 12:36 of the third and Spezza scored in the final minute after Kallgren was pulled for an extra skater.

“We definitely didn’t have our best (Sunday) but you’re going to find yourself in those situations,” Spezza said. “I think the comeback is great because we stuck with the game. Huge goal by Mikheyev to give us a chance, and then six-on-five, good to see us execute. It’s something we’ve been working on in practice quite a bit. Something we’re going to need.”

Auston Matthews hasn’t scored in any of the past five games but remains the league leader with 58 goals. His teammates have 60 in mind.

“I think it’d be great,” defenseman Justin Holl said. “But at the same time, it’s just a number. I don’t know if he cares about it that much.”

On Sunday, Detroit (31-39-10, 72 points) began a three-game road trip to close out its season, earning a 3-0 victory over the New Jersey Devils. Alex Nedeljkovic needed just 17 saves to collect his fourth shutout.

The Wings bounced back from a 7-2 loss to Pittsburgh in their home finale on Saturday.

“Some things were said in the room after the game (Saturday),” Nedeljkovic said. “We’ve had too many of those games where we ended up kind of blown out. (Sunday) was a big game for some guys to rebound and right the ship, myself included.

“It’s been that kind of the last few months and we have to find a way to stop that from happening (by) coming out with more of these kind of performances.”

The Wings will complete their season with another road game against the Devils on Friday.

“These last three games are an opportunity for us to kind of show and put what happened (Saturday) behind us,” Nedeljkovic said.