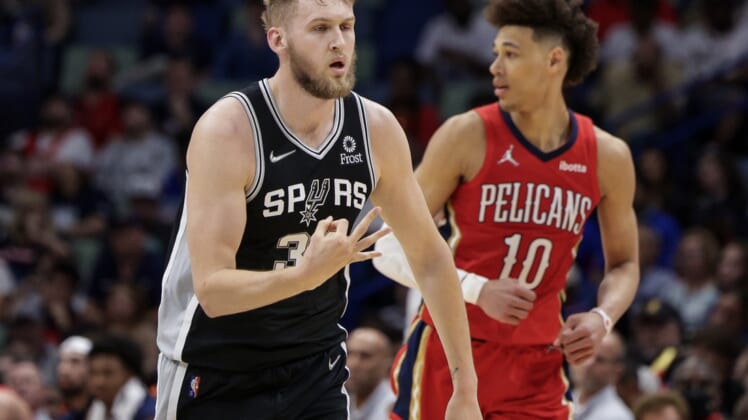 When the New Orleans Pelicans acquired guard CJ McCollom from Portland at the trade deadline, their aim was to solidify, at minimum, a spot in one Western Conference play-in game.

Complicating those plans are the San Antonio Spurs, who stretched their winning streak to three games with a 107-103 road win over the Pelicans on Saturday that narrowed the margin between the two teams to one game for 10th place in the West.

With playoff hopes still afloat, the Spurs will seek to keep the urgency alive Monday when they face the Houston Rockets on the road in that season series finale.

The Spurs had dropped eight of the previous 12 games prior to their sudden surge and were deemed a postseason afterthought.

“This was an urgent win for us,” Spurs reserve center Jock Landale said. “Chasing these guys down for that 10th spot is where our heads (are) at, and we knew coming in we had to get this done if we wanted to keep some real hope alive.”

Turning its attention to the Rockets, San Antonio has won two of the three previous meetings including a 134-104 dismantling of the Rockets at Houston on Jan. 25.

Dejounte Murray paired 19 points with 10 assists in that victory over the Rockets and is averaging 23.3 points, 7.3 rebounds and 10.7 assists against Houston this season. He was named to his first All-Star team this season and continues to perform at that level, recording his 13th triple-double with 15 points, 11 rebounds and 13 assists in the win over the Pelicans.

But the Spurs have played their way into postseason contention by performing better around Murray. Six other Spurs scored in double figures against New Orleans to help offset an off shooting night for Murray, who finished 4 of 19 overall and missed all five of his 3-pointers.

“The pieces around DJ are starting to step up and help him carry the load, and then DJ is incredible every night,” Landale said. “I think that our team is clicking on all cylinders right now, and hopefully we can carry that forward through the next seven or so games and make sure that we keep our postseason chances alive.”

The Rockets recorded a second win over the Portland Trail Blazers in as many nights Saturday, earning a 115-98 victory and marking back-to-back wins for the first time since mid-January. Houston also secured its first win without veteran guard Eric Gordon after going 0-17 previously.

“It’s good for our group,” Rockets coach Stephen Silas said of sweeping the back-to-back and winning despite playing for the fifth time in seven days. “Finding ways to win is important for our group. Starting off slow and then changing it in the second half is also very important for us as far as having a way of playing.

The victory, the third in four games following a 3-22 stretch, might prove detrimental for Houston and its positioning in the upcoming NBA Draft. The Rockets moved into a tie with Detroit and Orlando for the fewest wins in the league (20) and just one less than the Oklahoma City Thunder.