After rare day off, Nuggets ready for Raptors 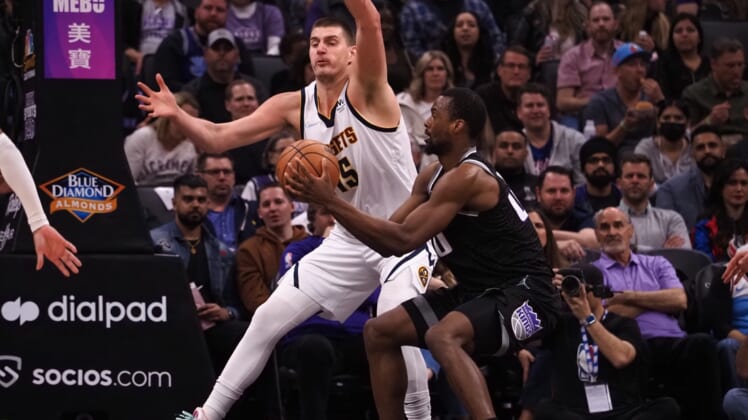 The NBA season is a grind, and the Denver Nuggets felt that in the first 10 days of March. Denver played six games in nine days, four in five, and strung together four wins in a row.

The schedule — and a hot Steph Curry — caught up with the Nuggets in a 113-102 loss to the Golden State Warriors on Thursday night. Now, with a day of rest, they are ready to host the Toronto Raptors on Saturday night.

The Raptors will be playing for the second straight night. They took care of the first game with a 117-112 win at the Phoenix Suns on Friday night in the third game of a six-game road trip.

Saturday will be the second of two meetings between the teams this season, and the Nuggets have a chance to get the sweep of the season series. They won the first one 110-109 in Toronto on Feb. 12 when Nikola Jokic blocked OG Anunoby’s shot in the final seconds to end the Raptors’ eight-game winning streak.

Denver has surged since dropping three in a row to start February. The Nuggets have gone 12-3 since to tighten the race in the Western Conference despite playing a cramped schedule. They had a chance to win the four games in five nights and led the Warriors with four minutes left in the fourth quarter but fatigue set in.

Jokic missed all eight of his 3-point attempts but finished an assist shy of another triple-double, but coach Michael Malone didn’t want to hang the loss on the schedule.

“Everybody is tired this time of the season, but we don’t subscribe to readily available excuses,” he said Thursday night.

Toronto’s win at Phoenix was its second straight after dropping three in a row. The Raptors are in seventh place in the Eastern Conference and would host a play-in game if the season ended as is. But they are only two games behind sixth-place Cleveland and a sure spot in the first round.

Toronto got a boost in the win over the Suns with the return of Fred VanVleet, who missed five games with a knee injury. VanVleet had 10 points in the win but the start was Gary Trent Jr., who scored a season-high 42 points and made a career-best eight 3-pointers.

The Raptors won’t have Anunoby available for Saturday while he nurses a finger injury while Denver’s Will Barton has missed two games with an ankle injury. The Nuggets did not practice on Friday so there was no update of Barton’s availability.

Coach Nick Nurse is still trying to figure out how to distribute minutes and shot attempts among the trio.

“Some nights we are (successful),” Nurse said. “I would say some nights you would say, with the size advantage, we’re getting the offensive putbacks and things seem to keep ticking over pretty good. Then there are nights we don’t get many looks at the three or make enough or keep pace out there.”