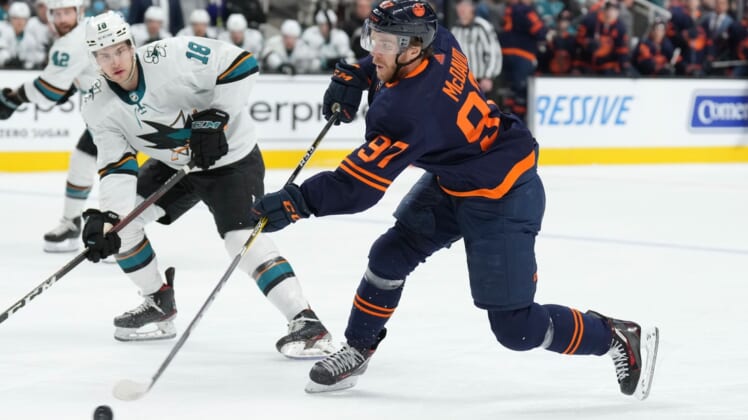 The Edmonton Oilers had a chance to match an obscure, 77-year-old NHL record Tuesday night at Dallas.

The Oilers, who will play host to the San Jose Sharks on Thursday night, had won their first 21 games this season in which they scored first.

They opened the scoring against the Stars, but allowed two goals in a 24-second span late in the third period and then an empty-netter to lose 5-3. As a result, they fell a game short of the 1944-45 Montreal Canadiens’ record.

“I think it was two good hockey teams who trade punch for punch there,” Oilers coach Jay Woodcroft said. “It’s disappointing the way it ended for us. Obviously we’d like to have that last six minutes or so back … not our finest hour in that last six minutes. We’ll have to learn from it and move on.”

Woodcroft attributed the Oilers’ late defensive lapses to fatigue after losing 3-2 in overtime Monday at Colorado.

“There was a lot of swings in the game, but when there are five minutes left you can’t put yourself in those types of situations where your goalie’s got to make saves in the situations that we did,” Oilers defenseman Darnell Nurse said. “(Goaltender Mikko Koskinen) played huge for us and we’ve got to be better for him in front of him, especially at the end of the game.”

Kailer Yamamoto, Leon Draisaitl and Evander Kane scored for the Oilers, who are trying to hold on to third place in the Pacific Division.

“Obviously I think we could’ve been a bit sharper on those plays at the end there, but desperation levels are high with a lot of teams right now,” said Draisaitl, who is second in the league in scoring to teammate Connor McDavid.

“Just a couple of mistakes that can’t happen, but all in all, I thought it was a pretty solid effort again.”

The Sharks rallied for a 4-3 victory Tuesday at division-leading Calgary, as captain Logan Couture and Alexander Barabanov scored 28 seconds apart in the third period.

Defenseman Marc-Edouard Vlasic and Timo Meier also scored for San Jose, which became the first team this season to defeat the Flames after trailing through two periods.

“Coming into this building after a trade deadline, having guys injured and out of the lineup, I thought it was a great team effort,” Sharks coach Bob Boughner said.

San Jose improved to 3-0 in the season series against the Flames.

“They’re a very good hockey team and we’ve played them hard now three times this year,” Couture said. “Sometimes the best teams in the league bring the best out of us. It’s a good attribute to have.”

James Reimer made 28 saves for the Sharks, who have won two in a row but still entered play Wednesday nine points out of the Western Conference’s final wild-card berth.

“We’re going to battle here and see what happens these last 19 games, but it’s a good feeling in the locker room right now,” Couture said. “We want to build off of it.”

Goalie Kaapo Kahkonen, acquired from Minnesota on Monday at the NHL’s trade deadline, backed up Reimer in Calgary and could make his Sharks debut Thursday.

The Oilers hope to get forward Ryan Nugent-Hopkins back after he’s missed the past 11 games with a shoulder injury.