After overtaking Mets, Braves seek another win over Mariners 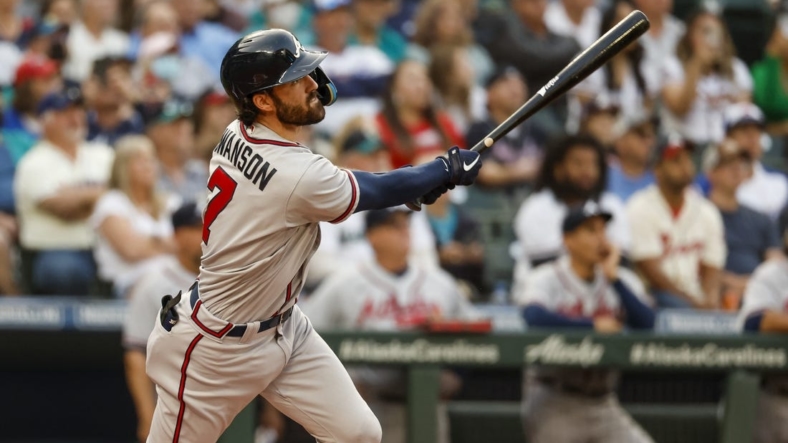 The Atlanta Braves are in sole possession of first place in the National League East for the first time this season.

The defending World Series champion Braves hit four home runs Friday night in a 6-4 victory over the Seattle Mariners to move a half-game ahead of the New York Mets, who had been in first place in the division since April 11.

The Braves (87-51), winners of eight straight, will continue their three-game series in Seattle on Saturday night.

“That’s why we’re playing these games is to try to win the division,” said Braves manager Brian Snitker, whose team was 10 1/2 games back on June 1. “When we left spring training, our No. 1 goal was to win the division. The guys have been great in their approach and how they come to work, so it’s good.”

It was a slugfest, as Carlos Santana homered twice and J.P. Crawford also went deep for the Mariners.

Seattle (77-61) lost its second in a row and dropped into the American League’s third wild-card position. The Mariners still have a four-game lead over the Baltimore Orioles for the league’s last playoff berth.

“Carlos Santana kept us in the game single-handedly,” Mariners manager Scott Servais said. “That was a big home run early in the upper deck. Gosh, you don’t see many of those here.”

Braves left-hander Max Fried (13-5, 2.48 ERA) and Mariners right-hander George Kirby (6-3, 3.15) will try to keep the ball in the park on Saturday. Both pitchers will face the opponent for the first time.

Fried has won three of his past four starts. He pitched five hitless innings in a 7-1 victory against the Miami Marlins in his most recent start on Sunday, but his no-hit bid was thwarted by a nearly two-hour rain delay.

“I knew that rain was in the forecast; I just wish we would’ve held off a little bit longer,” Fried said. “Not looking too much into it — just glad that I was able to get through five and then get a win. This time of year, it’s all about just winning baseball games, so if I’m going out there and we won the game, I’m doing my job.

“I think that might be the first outing that I’ve thrown that ended with no hits. So it’s a first, but I would have loved to see how deep I could have (gone in) the game with it.”

That same day in Cleveland, Kirby had his start shortened to three innings by a 4 1/2-hour delay. The rookie was named the AL’s Rookie of the Month for August, when he went 4-0 with a 2.15 ERA.

Kirby’s most intriguing matchup might come against Atlanta’s Michael Harris, who doubled and homered Friday to extend his hitting streak to 15 games, the second-longest for a rookie in Braves’ history to Freddie Freeman’s 20-game run in 2011.

Harris is batting .455 with four homers and 11 RBIs during the stretch.