After OT win, Blues look to hold off Avalanche, elimination 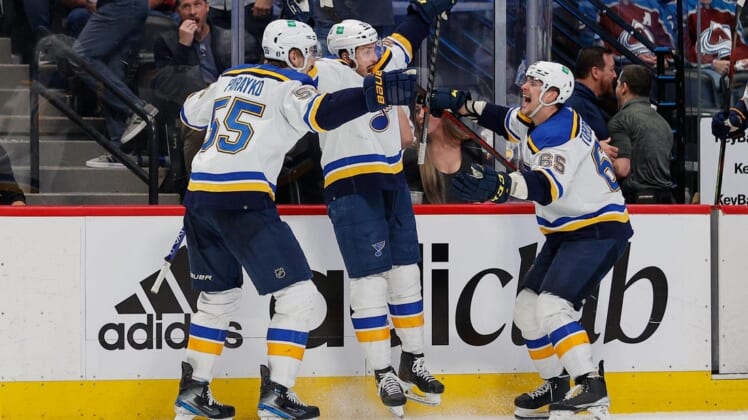 After failing to dispatch the St. Louis Blues at home in Game 5, the Colorado Avalanche will try to clinch their second-round series Friday night on the road.

The Avalanche lead the series 3-2 and aim to advance to the Western Conference final for the first time since 2002.

The Blues forced the series back to their home ice at Enterprise Center for Game 6 by rallying from 3-0 and 4-3 deficits to win 5-4 in overtime and keep their postseason alive.

“It’s starting to look like you’re either the hammer or the nail in the series, so we have to go and be the hammer,” Avalanche coach Jared Bednar said. “We have to keep moving forward and pressing and forcing them into mistakes. But it starts with the competitiveness and the puck decisions. As the game went on, (the Blues) had a little bit extra in the battle, we didn’t, and our puck decisions were not good.”

Vladimir Tarasenko started the Blues’ comeback with a second-period goal. St. Louis stepped up its pressure in the third period and tied the game on goals by Robert Thomas and Jordan Kyrou.

“It’s just character and leadership,” Blues coach Craig Berube said. “We’ve got a lot of character in that room, we all know that. This team has come from behind quite a bit this year in games, so they don’t give up. You’ve just got to keep playing and keep battling and they did that. That’s all on them.”

Avalanche star Nathan MacKinnon appeared to clinch the series with a spectacular end-to-end scoring rush with 2:46 left in regulation to complete his hat trick. But the Blues pulled goaltender Ville Husso and scored 6-on-5 with Thomas’ rebound conversion with 56 seconds remaining.

“It was an amazing hockey game,” said Blues forward Tyler Bozak. “Obviously, MacKinnon’s one of the best players in the league and makes plays in crucial moments and did it there. But we have great leadership on our team. We have a lot of guys who have won before. We knew there was still lots of time. The guys got it done and got us to overtime and then it’s anybody’s game when you get there.”

“The third period, they did a good job of keeping pucks in and we got a little bit sloppy with some of our clears,” Avalanche captain Gabriel Landeskog said. “It’s desperation mode for them, they’re throwing pucks to the net, rebounds are laying there and they’re outnumbering us at the net, simple as that. But, you know, we’ve got a short memory and move on.”

The Avalanche plan is to regain the form they demonstrated while winning Games 3 and 4 in St. Louis by the combined score of 11-5.

“We got to move on like Gabe said and come back and win Game 6 on the road,” MacKinnon said. “It’s a fun opportunity for us. Hopefully everything happens for a reason, and we’ve got to go get this done. But it should make our team a little harder, a little more grittier in these situations. Can’t win every series in four and five. They have a great team, and we’re excited to go have a huge challenge in St. Louis and try to close out a series.”