After loss, Dodgers line up LHP Julio Urias for Game 4 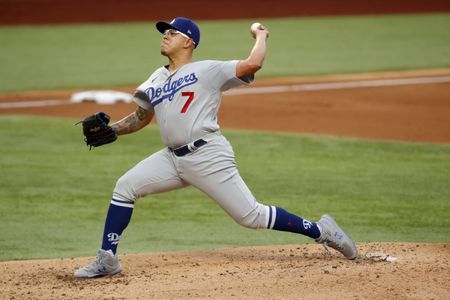 The Los Angeles Dodgers might have lost Game 2 of the World Series on Wednesday night, but they gained a sense of normalcy for their starting rotation.

Because left-hander Julio Urias was not used in the 6-4 defeat to the Tampa Bay Rays, in what was essentially a bullpen game for Los Angeles, he will slot into the rotation for Game 4 on Saturday night.

It means the Dodgers will now have power-pitching right-hander Walker Buehler lined up for Game 3, Urias to follow and then Clayton Kershaw set for Game 5 on Sunday night. The best-of-seven series is being played at Arlington, Texas.

“We feel great,” Dodgers manager Dave Roberts said of his new pitching plan moving forward. .”.. And if you look at kind of where our relievers are set with the day off (Thursday), we’re in a great spot.”

The Rays will start Charlie Morton in Game 3 as the teams look to gain an upper hand in the series. Tampa Bay has not named a Game 4 starter, but manager Kevin Cash has hinted at using left-hander Ryan Yarbrough at the outset in what would be a bullpen game.

Urias was available to pitch in some capacity during Game 2, according to Roberts, and was even throwing in the bullpen at one point. But that merely ended up being a between-outing throwing session.

The Dodgers used seven pitchers in Game 2, with rookies Tony Gonsolin and Dustin May combining to give up four of the Rays’ six runs. The Rays won behind a strong 4 2/3-inning pitching performance from left-hander Blake Snell, who gave up two runs on two hits with nine strikeouts.

Buehler will make his next start with an extra fifth day of rest after pitching Game 6 of the National League Championship Series on Saturday. Urias will also be plenty rested after pitching three perfect innings to close out Sunday’s Game 7 victory over the Atlanta Braves.

Kershaw’s next outing will come after he was solid in Game 1 of the series, giving up just one run on two hits over six innings.