After latest suspension, Vontaze Burfict has now lost nearly $4 million due to discipline 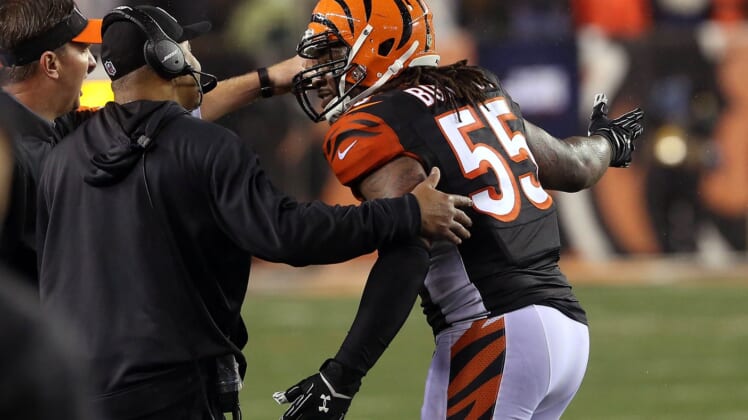 The NFL officially suspended Cincinnati Bengals linebacker Vontaze Burfict four games for PEDs on Thursday. In no way was this surprising, as it was expected after the suspension was reported last month.

Along with the four-game ban, Burfict will not be paid during his absence. This suspension will end up costing Burfict slightly more than $1.6 million. According to Jay Morrison of My Dayton Daily News, “He will lose $896,470 in game checks, plus another $562,500 in 46-man roster incentives that were worked into the three-year, $32.5 million contract he signed in September.”

When you add up all the other fines and suspensions that have cost Burfict money, this puts his total money lost at over $3.8 million.

The big ones obviously are this new suspension, and his three-game suspension from 2017 (originally slated to be five games) for repeated violations of the player-safety rules after a hit on Kansas City’s Anthony Sherman.

That said, Burfict has a long history of being fined for illegal hits (like this one) and acts of poor sportsmanship. A couple of examples are when he stepped on the leg of LeGarrette Blount back in 2016 ($75,000 fine) and a trio of unsportsmanlike penalties against the Pittsburgh Steelers back in 2015 (fined nearly $70,000).

What’s truly remarkable is how staunchly the Bengals continue to stand behind Burfict, even going so far as to ink him to a massive extension recently.

We already know Cincinnati has no intention of releasing Burfict for this latest violation. So, it stands to reason he can continue making big mistakes without any consequences other than losing some mad cash.