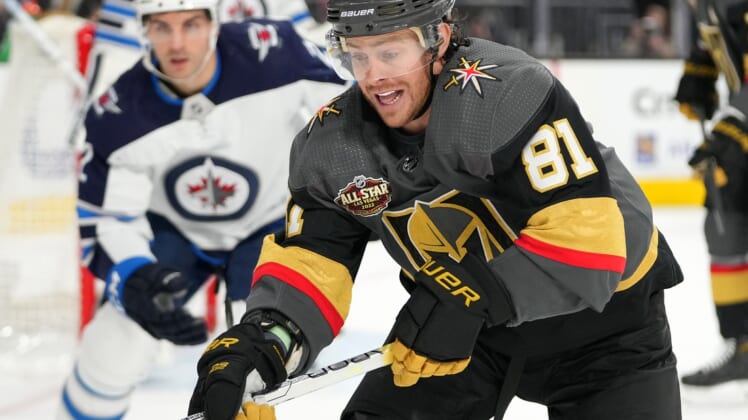 Kyle Connor scored with 2:21 remaining in overtime to give the Winnipeg Jets a 5-4 victory over the Vegas Golden Knights on Sunday afternoon at Las Vegas.

Connor deked around Jonathan Marchessault at center ice and then went in on a two-on-one rush with Josh Morrissey before ripping a wrist shot from the right circle past Laurent Brossoit’s blocker side for his 19th goal of the season and the game-winner.

Paul Stastny, Andrew Copp, Jansen Harkins and Kristian Reichel scored goals for Winnipeg, which was playing its first game since Dec. 17 due to COVID-19 postponements. Connor Hellebuyck stopped 42 of 46 shots while Morrissey added two assists.
.
Mattias Janmark scored twice in the third period for Vegas to force overtime, Michael Amadio had a goal and an assist and Evgenii Dadonov also scored as the Golden Knights lost for just the third time in 13 games.

Vegas fired 22 shots, a season-high for any period, while taking a 2-0 lead in the opening 20 minutes. Amadio snapped a seven-game pointless drought with his third goal of the season to make it 1-0 at the 13:05 mark, putting in a rebound of a Whitecloud point shot into a wide-open left side of the net.

Dadonov then scored his ninth goal of the season less than four minutes later on a two-on-one rush with Amadio when his crossing pass caromed into the net off the skate of Morrissey.

Winnipeg bounced back to tie it early in the second period with two goals in the span of 20 seconds, taking advantage of a pair of turnovers by the Golden Knights in their own zone in the process.

Harkins cut it to 2-1 after a Whitecloud giveaway with a wrist shot from the high slot past Brossoit’s glove side. Reichel, playing just his second NHL game, then tied it with his first career goal, firing a shot from the right circle over Brossoit’s left shoulder.

Stastny gave the Jets their first lead of the game early in the third period when he deflected Morrissey’s point shot under Brossoit’s right arm for his third goal in two games and eighth of the season. Copp made it 4-2 for Winnipeg just 1:48 later with a power-play goal, putting in his third attempt from in front of the crease for his eighth goal of the season.

But Janmark cut it to 4-3 with 6:23 remaining when he wrestled the puck away from from Dylan DeMelo inside the blue line and roofed a wrist shot over Hellebuyck’s glove side. He tied it with his sixth goal of the season with 8.1 seconds left and Brossoit off for an extra attacker when Shea Theodore’s point shot caromed in off his skate.