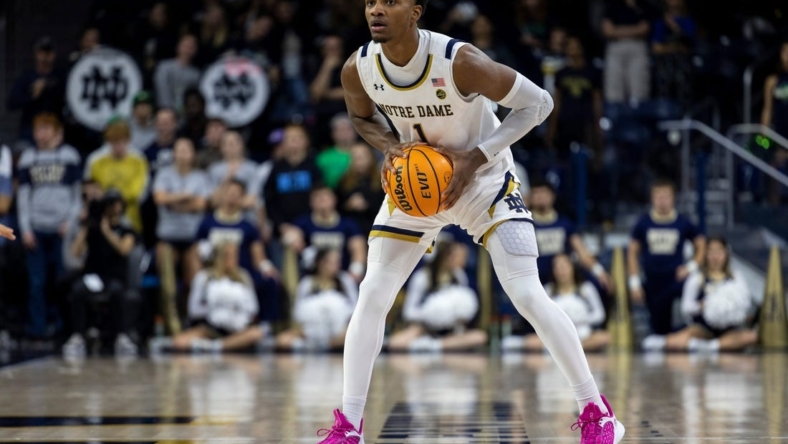 Notre Dame is accustomed to being the biggest game on the schedule for most of its nonconference opponents.

On Wednesday night, the Fighting Irish will be the opponent for the one of the biggest games Southern Indiana has ever played.

Notre Dame will welcome its fellow Hoosier State residents to South Bend on Wednesday night, hosting the fledging Division I program for the first meeting of schools located about 300 miles apart.

There’s been nothing easy about a 2-0 start for undermanned Notre Dame. After needing a go-ahead jumper by Cormac Ryan with 9.5 seconds left in a 79-76 win over Radford last week, the Fighting Irish were locked in a one-point game with Youngstown State with under five minutes left and couldn’t put the game away until freshman JJ Starling hit 3-pointers on consecutive trips down the floor in the final two minutes.

Starling, who finished with 17 points Sunday, is the lone newcomer in the starting lineup for the Irish, who have a quartet of graduate seniors playing their fifth season granted to those who played during the pandemic-shortened 2020-21 campaign. Those four players — Ryan, Dane Goodwin, Nate Laszewski and Trey Wertz — have combined to score 126 of Notre Dame’s 167 points this season.

“We’re going to have to score to escape some people,” Notre Dame coach Mike Brey said. “You can’t simulate game situations and pressure like we had the last two games. We figured out how to do it. Our veterans are really veterans.”

Southern Indiana (1-1) is one of five Division I newcomers this season following a successful five-decade run in Division II (current Auburn head coach Bruce Pearl directed the school to the 1995 national championship). The Screaming Eagles joined the 10-school Ohio Valley Conference, and were projected as seventh in the league’s preseason poll.

After nearly overcoming a 20-point deficit in a 97-91 loss to Missouri on Nov. 7, Southern Indiana outscored Southern Illinois 43-27 in the second half to win its home opener. Jelani Simmons scored a game-high 18 points for the victors while Gary Solomon flirted with a double-double (16 points, nine rebounds).

“Our guys may not appreciate or understand what it means to them now because they’re young,” Gouard told Evansville television station WFIE. “But I always tell them when they become my age, they’ll look back at this and realize what this moment means to them.”