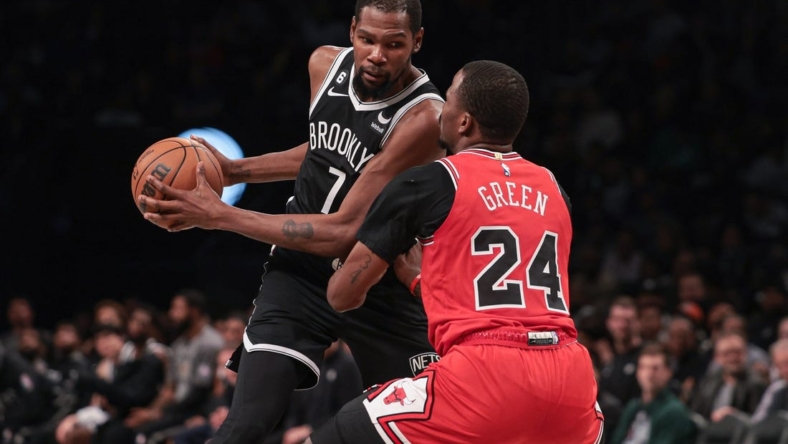 Zach LaVine scored 20 of his season-high 29 points in the fourth quarter as the Chicago Bulls rallied down the stretch for a 108-99 victory over the struggling Brooklyn Nets on Tuesday in New York.

LaVine scored eight straight points during a 10-0 run that spanned 1:45 and gave the Bulls a 101-90 lead. He hit a 10-footer in the lane and then connected on two long 3-pointers before Nikola Vucevic converted a hook shot for an 11-point edge with 4:57 remaining.

The Nets, playing hours after parting ways with coach Steve Nash, lost for the sixth time in eight games this season. Jacque Vaughn began his second stint coaching the team, but it is expected to a short tenure after reports surfaced about Brooklyn naming former Nets assistant and former Celtics head coach Ime Udoka as its next bench boss.

Brooklyn’s Kevin Durant led all scorers with 32 points to go along with nine rebounds and six assists. Royce O’Neale added 20 points for the Nets, who shot 48 percent. Kyrie Irving was held to four points on 2-of-12 shooting and did not score until early in the fourth quarter.

After taking a 58-52 lead into halftime, Brooklyn held a 76-65 lead on a put-back by Yuta Wantabe with four minutes left in the third. Chicago outscored the Nets 12-4 over the final 3:59 to get within 80-77 on a jumper by DeRozan at the horn.

Chicago never trailed after Alex Caruso’s corner 3-pointer made it 89-88 with 7:52 left. Moments after Irving hit a fadeaway to pull Brooklyn within 91-90 with 7:01 remaining, LaVine began his binge.