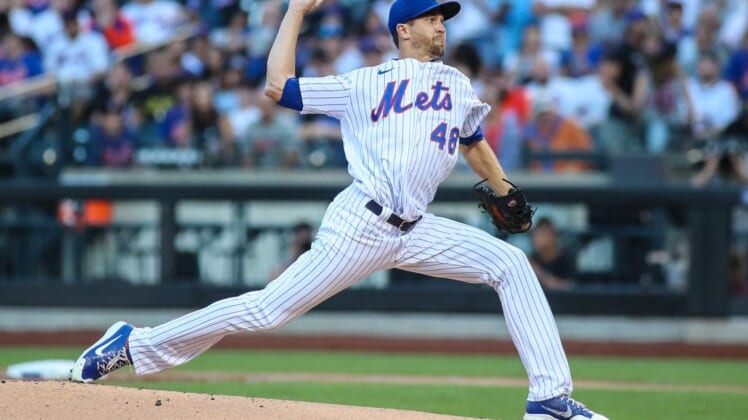 The New York Mets had a day off on Wednesday and will have a well-rested Jacob deGrom pitching on Thursday night.

In other words, the Colorado Rockies — in the midst of a typically rough season away from Denver’s mile-high air — could face a rough start to their 10-game road-trip.

DeGrom and the Mets will open a 10-game homestand Thursday when they host the Rockies in the opener of a four-game series. DeGrom (2-1, 2.31 ERA) is slated to oppose Ryan Feltner (2-4, 5.88) in a battle of right-handers.

Both teams are coming off brief interleague series. The Mets were off Wednesday after ending a 10-game trip Tuesday with a 4-2 loss to the host New York Yankees that completed a two-game sweep.

The Rockies missed a chance to sweep a two-game set from the visiting Texas Rangers, falling 16-4 in a Wednesday matinee.

DeGrom originally was penciled in to start on his usual four days’ rest on Tuesday, but the Mets pushed him back to Thursday to give him a little extra time off and to spread out the starts for deGrom and his fellow former Cy Young Award winner, Max Scherzer. deGrom has made just four starts since missing 13 months due to elbow and shoulder injuries.

The aces were starting one after another — Scherzer took the loss Monday night — but with the back end of the Mets’ rotation in a state of injury-related uncertainty, Mets manager Buck Showalter wanted to split up the pair, at least temporarily.

Carlos Carrasco is expected to be out until at least the middle of September with an oblique injury, while Taijuan Walker returned Tuesday after missing a start due to back spasms.

“Until we get Carlos back and make sure that Tai is OK, it’s one of those things,” Showalter said. “If you plan too much, there is nothing given that Max is going to pitch deeper into a game, but if you go by track record, it probably makes sense to split those guys up.”

DeGrom took his first loss of the year in his most recent start, when he gave up three runs over a season-high 6 2/3 innings as the Mets fell 3-2 to the Atlanta Braves on Aug. 18. He is 5-1 with a 1.17 ERA in nine career starts against the Rockies.

The Mets, who once led the Braves by 10 1/2 games in the National League East, will enter Thursday with just a 1 1/2-game lead over their red-hot division rival. Atlanta is 55-21 since June 1.

“We’ll go home and try to get things going again,” Showalter said Tuesday night of the Mets, who have lost three of their past four games.

The Rockies generated a bit of momentum by taking two of three from the visiting San Francisco Giants last weekend, but Jose Urena’s historic struggles cost Colorado a chance at a second straight series win.

“Yeah, it is frustrating, but you’ve got to keep your mind right,” Urena said.

Feltner didn’t factor into the decision on Saturday, when he allowed one run on two hits over six innings in the Rockies’ 4-3, 10-inning win over the Giants. He has never opposed the Mets.