After embarrassing loss, Oilers look to regroup vs. Coyotes 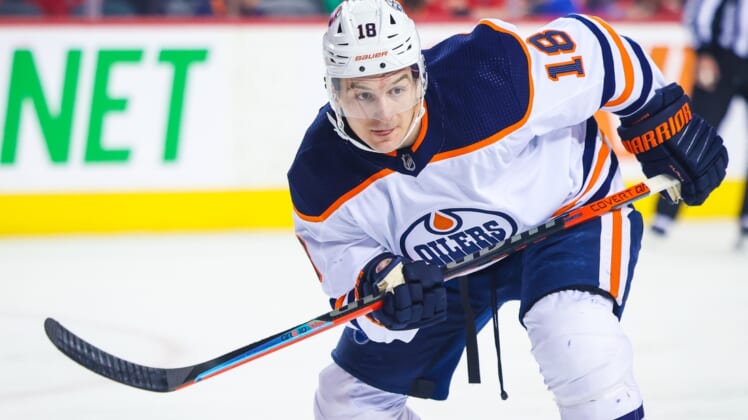 In the big scheme of things, it’s only one loss, but don’t be shocked if the Edmonton Oilers have extra jump in their step when they play host to the Arizona Coyotes on Monday.

The Oilers, who sit third in the Pacific Division, have been among the league’s hottest teams the past couple of months, but they suffered a huge indignity in Saturday’s 9-5 road loss to the Calgary Flames, a score that actually flattered them.

“We’d spent the last five weeks or so trying to improve certain areas of our game, and I thought we got away from it and paid the price,” coach Jay Woodcroft said of his team’s dismantling in the Battle of Alberta clash.

“Nine even-strength goals against, not good enough. We came into the Saddledome and scored five goals — that should be enough to win a game — but … it wasn’t about what we got, it was what we gave them.”

Edmonton actually opened the scoring in the first minute and saw Leon Draisaitl collect a hat trick in a four-point game. Ryan Nugent-Hopkins also produced four points and Connor McDavid added two assists, but the cause of their demise was obviously their poor defensive play.

“We played bad. We played poorly. Nine even-strength goals against … you can’t blame our goalies. We hung them out to dry. Just an all-around poor performance,” Zach Hyman said.

“You regroup. It’s a one-off. You remember it, you learn from it. We’ll play these guys again, and you regroup from it. We’ve been playing well before that, so just get back at it. You have no time to think about it. There’s a lot of hockey left and we’ll be ready for Monday,” Hyman said.

The Coyotes, whose 20 wins are tied for fewest in the Western Conference, arrive in Edmonton after a 2-1 overtime loss Sunday night to the host Winnipeg Jets.

Arizona, which is not yet mathematically eliminated from playoff contention (although that likely will happen this week), has lost five consecutive games (0-4-1).

The Coyotes may be playing out the string and destined to receive a very high draft pick once the season ends, but they certainly showed plenty of pride in Winnipeg. Thanks to strong goaltending from Karel Vejmelka during a one-sided first-period in which the Jets fired 14 shots on goal but only scored once, the Coyotes remained in the game.

Nick Ritchie scored early in the third period to force overtime, and defenseman Shayne Gostisbehere rifled a shot off the post in overtime moments before the Jets conjured the winning goal.

“We worked extremely hard tonight and showed a lot of pride,” said coach Andre Tourigny, whose job is as much about ensuring his players don’t quit on the campaign as anything else.

“I’m not sure we were sharp mentally in our detail in the first period, but we battled hard during the entire game. Mentally we played better in the second and third periods,” Tourigny said.

“Better” was enough to earn a single point and salvage something through the first two games of a three-game road swing.

“We’ve played some good hockey,” said Ritchie, who has netted seven goals and two assists in 14 games since being traded to Arizona from the Toronto Maple Leafs.

“For the remaining games, we’re going to build that momentum for next year. Every game matters, and can play that spoiler role with these teams coming up,”
Ritchie said.