After delay for small fire, Raptors rout Pacers in front of no fans 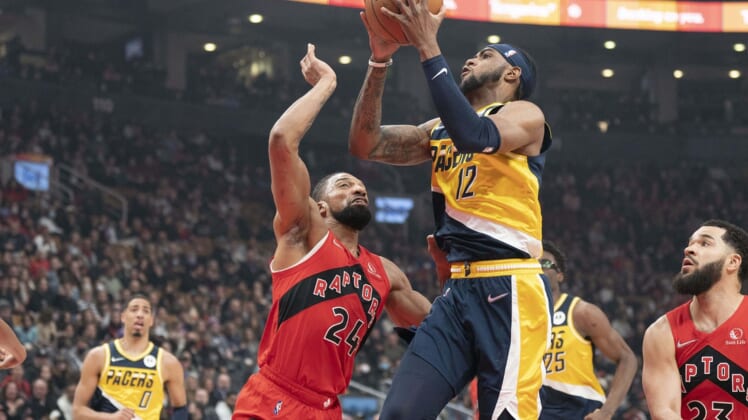 Following the evacuation of the audience and delay of more than an hour, the Toronto Raptors completed a 131-91 rout of the visiting Indiana Pacers on Saturday night.

An issue with arena speakers resulted in a small electrical fire beginning in the first quarter in the game at Scotiabank Arena. Toronto Fire Service officials called for the evacuation of the capacity crowd, and the teams left the court with 4:05 left in the second quarter and the Raptors leading 66-38.

Toronto’s dominance continued after a delay of one hour, five minutes and with no fans in the seats. Pascal Siakam led a balanced scoring attack with 23 points on 10-of-15 shooting from the floor.

Scottie Barnes added 19 points on 8-of-11 shooting and matched Siakam’s seven assists. Chris Boucher came off the bench to grab a game-high 10 rebounds and chipped in 15 points for a double-double.

Precious Achiuwa shot 4-of-5 from 3-point range off the bench en route to 18 points, while OG Anunoby shot 3-of-5 from deep and finished with 16 points. The Raptors went 15-of-32 from beyond the arc.

In control nearly from the outset, building a 41-21 lead through the first quarter, Toronto stifled Indiana defensively on both sides of the delay.

The Pacers shot just 41.8 percent from the floor, while the Raptors finished a blistering 60.7 percent. Siakam helped key the defense with three steals, while Anunoby and Thaddeus Young off the bench each made two.

The Raptors had a 62-32 advantage in points in the paint.