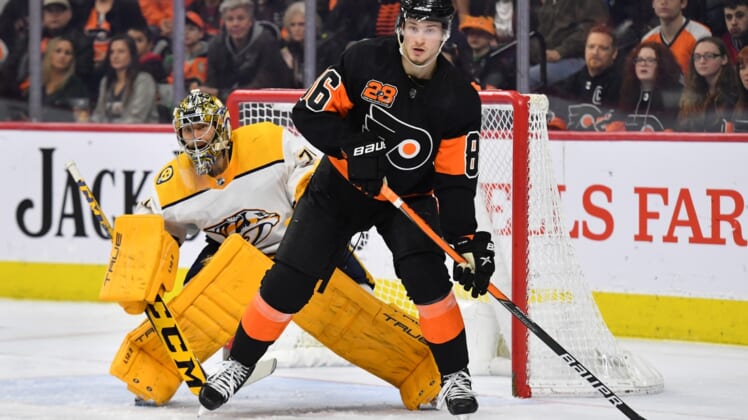 The Philadelphia Flyers began a new era on Sunday and recorded a victory. The Flyers’ second game without their longtime captain will take place in Detroit on Tuesday.

Claude Giroux was dealt to Florida over the weekend as the Flyers try to accelerate a rebuild. They defeated the New York Islanders 2-1 in their first game since the trade.

Kevin Hayes scored both of Philadelphia’s goals in the second period off assists from Travis Konecny and Joel Farabee.

The 22-year-old Farabee, who has 27 points this season, is one of the foundation pieces for the new-look Flyers.

“Just with the absence of G [Giroux], I think some other guys have to step up,” Farabee said. “It’s kind of a new era, in a sense. Talking to TK [Konecny], I think we have a little more responsibility, which I think we both embrace and we want to be the best players that we can be.”

The Flyers acquired forward Owen Tippett and two draft picks from Florida. Tippett played on the third line and also saw time on the power play. He nearly scored in his Philadelphia debut, banging a shot off the post.

The game on Tuesday begins a five-game road trip for Philadelphia.

The Red Wings went 1-3 on their road trip last week and have gone 1-6-1 over the last eight games.

The trade deadline on Monday appeared to weigh heavily on the minds of the Wings in recent weeks. Defenseman Troy Stecher was dealt to Los Angeles on Sunday.

“They (The Kraken) are in the same boat and they were able to come out and play a real good hockey game and outplay us,” Detroit coach Jeff Blashill said after Saturday’s game. “On Monday, the deadline will be over and we’ll have a whole bunch of the same guys and we have to play better.”

The Kraken outshot the Red Wings 16-6 in the first period but goaltender Alex Nedeljkovic, who had a 43-save shutout at Vancouver on Thursday, wouldn’t budge. He couldn’t keep it up in the third period when Seattle outshot Detroit 15-7.

“Ned gave us a chance to find our footing, a couple of incredible saves (in the first period) and when your goaltender is playing like that, you have to find a way to reward him,” forward Sam Gagner said.

The last time Detroit recorded back-to-back victories came at the Flyers’ expense on Feb. 9 and 12. The Red Wings won the first meeting in Philadelphia 6-3, then notched a 4-2 home victory.