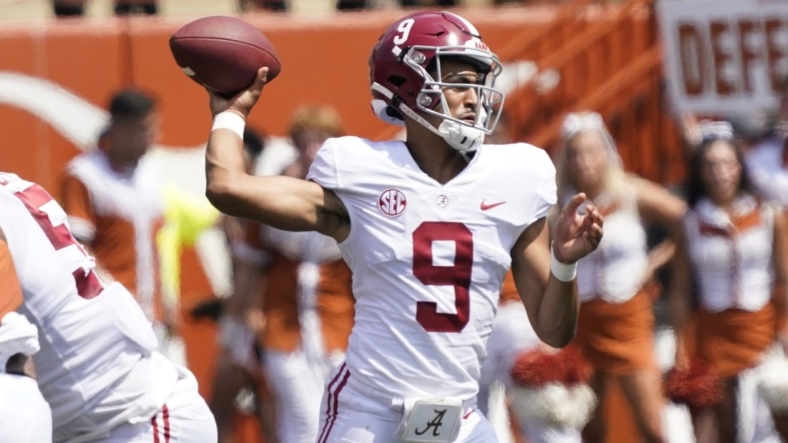 Alabama absorbed an upset loss to Louisiana-Monroe in coach Nick Saban’s first season at the helm of the Crimson Tide, with that history looming over Saturday’s repeat matchup between the programs.

Because the defeat was in 2007, though, Saban finds dwelling on it with current players largely ineffective as the Warhawks visit Tuscaloosa, Ala., on Saturday.

More recent history is fair game. It was only last week when top-10 programs Texas A&M and Notre Dame lost to visiting foes from non-power conferences. Neither is in the top 10 this week.

The Crimson Tide needed Will Reichard’s 33-yard field goal with 10 seconds left to escape unranked Texas’ upset bid and prevail 20-19 on the road. The close call knocked Alabama from the top spot, with Georgia ranked No. 1 in the country this week.

“History doesn’t seem to be on the forefront sometimes, and I do think that players relate better to things that affect them, which most of them don’t remember those types of things,” Saban said of a loss that occurred 15 years ago. “I think sometimes what happens currently, like what happened last week to a couple teams, may be something that they can identify with and relate to better.”

Alabama used the heroics of reigning Heisman Trophy winner Bryce Young to get past Texas, including an athletic escape from a would-be sack that turned into a 20-yard run on the game-winning drive.

Young was 27-of-39 passing for 213 yards and a touchdown, while rushing seven times for 38 yards. Jase McClellan had a game-best 97 yards and a TD on six carries.

“I think there’s a lot to learn from this last game,” Saban said. “I think No. 1, it’s not just about playing hard. I think our guys played hard in the game. … It’s also about playing smart, having good discipline to execute, focus on what’s in front of you and do your job. Not only do your job but do it fundamentally with the correct technique.”

Louisiana-Monroe (1-1) is coming off a 35-7 rout of Nicholls State that saw quarterback Chandler Rogers complete passes to 10 different receivers.

Rogers was 20 of 25 for 253 yards and two scores, with Jevin Frett making six receptions for 71 yards and a TD.

“Chandler played with such poise,” Warhawks coach Terry Bowden said. “I know we dropped at least three of his passes early. It was just a magnificent night of either throwing for the first down or running just enough for the first down, managing our offense and knowing exactly what each play needed.”

A week before Alabama escaped at Texas, Louisiana-Monroe lost to the Longhorns 52-10.

Alabama leads the all-time series 2-1, with each meeting at Tuscaloosa. The programs last met in 2015, when the Crimson Tide got their revenge for 2007 by winning 34-0.

Bowden is 3-3 in his career against Alabama. Each contest came when Bowden coached rival Auburn in the 1990s.

The Crimson Tide enter Saturday’s game with a 54-game non-conference winning streak in the regular season, including 40 victories at home.