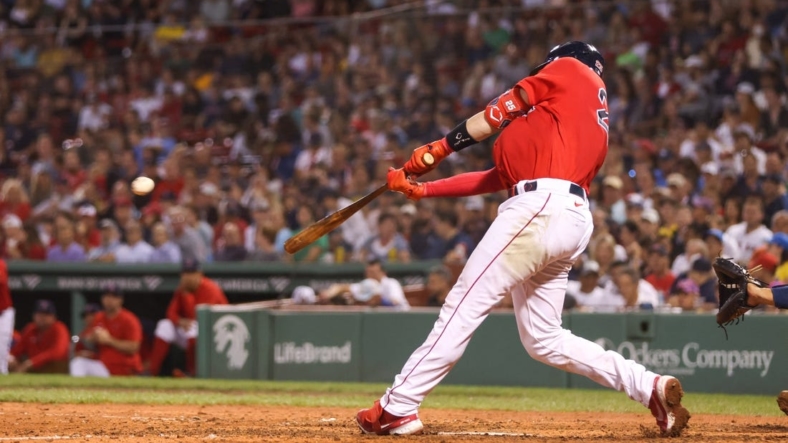 The Boston Red Sox finished Thursday with a sour taste after being swept by the Toronto Blue Jays, losing a second straight 10-inning game.

On Saturday afternoon, the Red Sox will have the opportunity to clinch a three-game series against another American League East foe, the Tampa Bay Rays.

While Boston’s eight-game deficit in the AL wild-card race is daunting, every game means more at this stage of the season.

“The win was huge,” catcher Kevin Plawecki told the Apple TV+ broadcast after a 3-for-4, two-RBI performance in the Red Sox’s 9-8, series-opening triumph on Friday. “To come through and pull that one out (after a five-run lead was cut to one in the eighth inning) was big for us, and hopefully we can carry it (forward).”

The Red Sox had 16 hits — collecting at least 15 for the second straight game — and got six innings from Michael Wacha en route to snapping a four-game skid.

Boston could get reinforcements on Saturday, as second baseman Trevor Story is expected to be activated. Story, who has been sidelined since July 13 with a right hand contusion, went 3-for-5 in two rehab games for Double-A Portland this week.

“We’ll take a look at him, and most likely he’s going to be active (Saturday),” Red Sox manager Alex Cora said. “He’s ready to go. We’ve just got to make sure everything checks in well in the morning, and the hope is for him to play.”

Boston left-hander Rich Hill (5-5, 4.68 ERA) will start on Saturday. Hill has allowed 10 runs in 12 innings over three starts since being activated from the injured list on Aug. 1. He had been sidelined due to a left knee sprain.

Hill was solid in his most recent outing, on Aug. 17 against the host Pittsburgh Pirates, but he got off to a tough start, surrendering a two-run home run to Bryan Reynolds in the first inning.

The 18-year veteran then retired 15 of the last 16 batters he faced to complete five innings in an 8-3 Boston win.

Hill is 2-0 with a 3.45 ERA in 13 career outings (four starts) against the Rays. He held them to four hits in four shutout innings on April 24 in St. Petersburg, Fla., his first start against them since 2019.

Prior to the Friday loss, the Rays owned the longest active winning streak in the majors, six games. They also had won six in a row against Boston.

Jose Siri hit his first homer for Tampa Bay in the eighth inning, one of the team’s three in the game. Yandy Diaz went 3-for-4, and Harold Ramirez drove in a run for the fourth straight game while extending his career-best hitting streak to 12 games.

However, the Rays lost for the first time this season when scoring eight or more runs.

“We came in playing pretty well. We can’t win them all,” Diaz said through an interpreter, according to MLB.com. “They came in swinging the bats, and they got the win.”

After JT Chargois made his first career start as the Friday opener, the Rays will return to using a regular starting pitcher on Saturday, Jeffrey Springs (6-3, 2.46 ERA).

The left-hander has won his past three decisions and allowed no more than two runs in each of his past four starts. His 5 2/3 innings of one-run ball with seven strikeouts on Monday helped the Rays start a four-game sweep of the Los Angeles Angels in a series that concluded Thursday before the Rays departed for Boston.

A five-year major league veteran, Springs hadn’t started against the Red Sox before July 5. He allowed three runs on five hits across four innings in that start, winding up with a no-decision in a game the Rays won 8-4. Overall against Boston in nine appearances, Springs has no record and a 3.09 ERA.