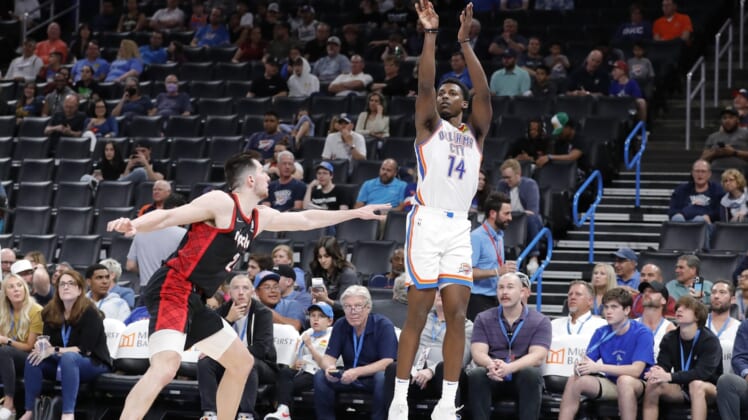 Hard to believe, but Rudy Gobert didn’t have the biggest double-double in the NBA on Tuesday night despite scoring 22 points and hauling in 21 rebounds in the Utah Jazz’s 121-115 overtime win against the visiting Memphis Grizzlies.

That honor belongs to Jaylen Hoard.

Hoard, who is on a 10-day contract with Oklahoma City, recorded 24 points and 21 boards — both career highs — to lift the Thunder to a 98-94 home win over the Portland Trail Blazers.

Hoard, who previously played for Oklahoma City’s G-League affiliate, will lead the Thunder (24-55) into a Wednesday meeting with the Jazz (47-32) in Salt Lake City.

It will be a back-to-back situation for both teams, although the Jazz have the advantage after playing at home on Tuesday.

Other than getting a chance to observe players such as Hoard, the Wednesday game is relatively meaningless for Oklahoma City, which has long been eliminated from playoff participation.

Utah, however, is jockeying for postseason seeding. The Jazz clinched a spot in the Western Conference’s top six on Tuesday, meaning they won’t have to go the play-in route, but they are still in contention for the fourth, fifth and sixth seeds.

The Jazz were relieved Tuesday to have fended off the Ja Morant-less Grizzlies. Utah, despite blowing a double-digit lead against a Memphis team that had won seven straight, emerged with just its second win in eight games.

Utah players liked that they responded to the late-game challenge presented by Memphis. The Jazz’s late-season dive has spawned rumors and reports of alleged bad chemistry between stars Donovan Mitchell and Gobert.

“A week ago we probably don’t win that game,” Gobert said. “There was a trust and intensity down the stretch. … We competed, we played the right way, the ball moved. And it’s a different game when we play the right way.”

Along with Gobert’s 20-20 game, the Jazz also were boosted by Jordan Clarkson’s 22 points and a 20-point, nine-rebound showing from Mitchell.

Meanwhile in Oklahoma City, the night belonged to Hoard, a Wake Forest product who has played in 36 NBA games over parts of three seasons with the Trail Blazers and the Thunder.

“It was special,” Hoard said. “Just seeing the guys are happy for me — felt really good about it.”

Portland coach Chauncey Billups was among the impressed observers.

“That Jaylen Hoard kid, he played his behind off, man,” Billups said. “We couldn’t do anything about him the entire night, the entire game. He took advantage of everybody that was in front of him. You’ve got to give him credit.”

The Jazz have another home game Friday against the Phoenix Suns before they play their regular-season finale at Portland on Sunday.