After busy stretch, Jets back on the road against Sabres 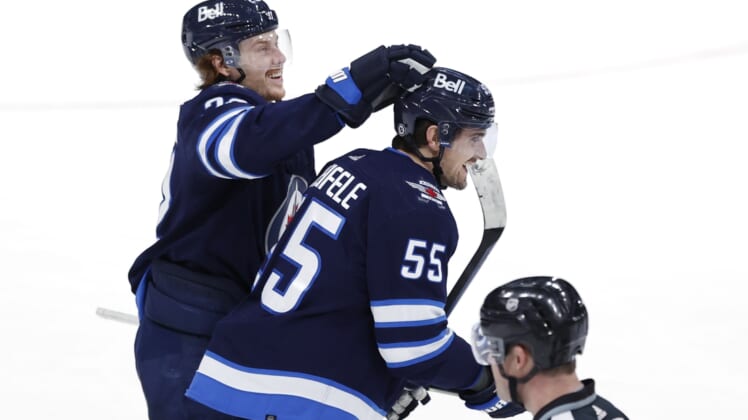 The Winnipeg Jets presumably have taken advantage of the opportunity to recharge their batteries following a dizzying stretch of play.

After playing five games in eight days, the Jets will return to the ice Wednesday when they visit the Buffalo Sabres. Winnipeg then will make the short trek to Toronto to face the Maple Leafs on Thursday.

“We’ve talked about it,” Jets interim coach Dave Lowry said following his team’s 2-1 overtime win over the Arizona Coyotes on Sunday. “When the coaches are tired, you can just imagine how the players are. And the stress, the build-up of the back-to-back games and the volume of games.”

Mark Scheifele scored both goals Sunday to extend his point streak to five games (three goals, six assists) and send Winnipeg to its eighth win in its past 11 contests. The Jets’ recent ascent has helped them close the gap in their bid to secure one of the wild-card spots in the Western Conference.

“Obviously, we want to make the playoffs, but we know we’re not going to make the playoffs in one game,” Scheifele said. “And all you can do is take each game in stride, play your best, leave it all on the ice and control what you can control. That’s all we can do.”

Speaking of streaks, the Sabres extended their point streak to a season-high six games (4-0-2) after overcoming a four-goal deficit in a 6-5 victory over the Chicago Blackhawks on Monday. It marked the fourth time in franchise history that Buffalo had come from four goals down to pick up a victory, with the last coming in a 6-5 decision against the Boston Bruins on Jan. 21, 1989.

Tage Thompson scored the go-ahead goal with 12 seconds remaining, even if he was unaware that he actually was responsible for the fireworks.

Thompson snapped his stick on a one-timer from the left circle, however the puck banked off the end boards and again off the left skate of Blackhawks goaltender Kevin Lankinen before entering the net.

“I was already halfway to the bench and I heard our bench going nuts,” Thompson said of the sequence that led to his team-leading 28th goal. “I turned around and saw them chasing me down. Yeah, I had no clue.”

“He had no idea that he scored until we were all together and he’s like, ‘So who scored?'” fellow forward Alex Tuch said. “And we’re like, ‘You.’ Yeah, interesting to say the least.”

Victor Olofsson recorded his third multi-goal performance of the season by scoring twice on Monday. He also had an assist.

Defenseman Rasmus Dahlin, who has set up two goals in back-to-back games, scored twice in the Sabres’ victory over the Jets.