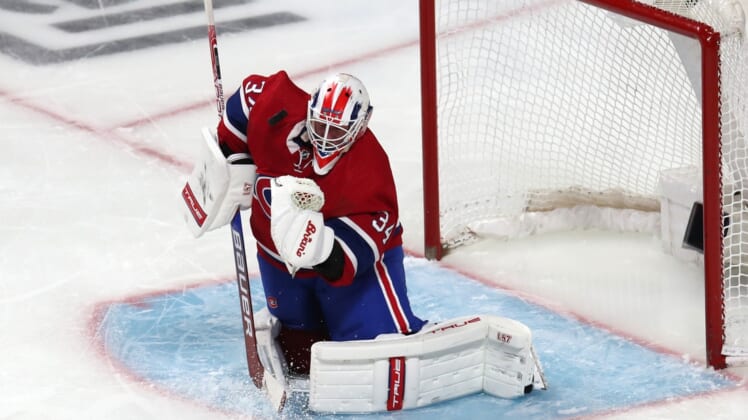 While the Montreal Canadiens and Ottawa Senators are among the bottom four teams in the Eastern Conference standings, the spirit to compete remains strong as the regular season winds down.

The Canadiens will try to end a two-game losing streak when they host the Senators on Saturday night. Ottawa is fresh off ending its own three-game skid.

Montreal won seven of eight from Feb. 17-March 5. However, the Canadiens are 1-2-2 since that impressive run, and yielded 13 goals during their current 0-1-2 stretch at home.

Cole Caufield and Nick Suzuki each had a goal and an assist, and Jake Allen, in his first action since Jan. 12, made 31 saves in Montreal’s 4-3 overtime loss to Dallas on Thursday.

The Canadiens are 8-6-2 since Martin St. Louis took over as coach.

“Maybe we don’t win every single night, but the guys are hanging in there, finding ways to compete and put on a good show,” said Allen, who has played twice since Dec. 14 due to COVID-19 issues and a lower-body injury.

Montreal’s Artturi Lehkonen has failed to register a point in three consecutive contests following a season-high five-game streak with at least one. That run started with two goals during the Canadiens’ 2-1 victory at Ottawa on Feb. 26.

Meanwhile, that defeat was the start of the Senators’ current 3-8-0 slide. However, Ottawa defeated Philadelphia 3-1 on Friday.

Josh Norris scored his 25th goal of the season — and 12th on the power play — to snap a 1-1 tie about midway through the third period. Perhaps more importantly, Ottawa clamped down defensively after giving up 15 goals in its previous three contests.

“It’s amazing what one win will do for you, so …” Ottawa coach D.J. Smith said.

“You don’t have great confidence when you’re losing. … But, we stuck with it.”

Anton Forsberg (2.77 goals-against average) made 28 saves on Friday, but with this back-to-back scenario and Matt Murray plagued by a neck injury, Filip Gustavsson could be in the Ottawa net looking to halt a six-game starting losing streak. Along the way, he has posted a 4.41 goals-against average.

Norris has six goals and two assists over his past six games. Also with a goal Friday, teammate Tim Stutzle has posted two with seven assists in his past eight contests.

After snapping a four-game road slide with its 4-1 victory at St. Louis on March 8, Ottawa aims to win back-to-back contests away from home for the first time since Feb. 13 and 17.

For Montreal, Caufield has 11 goals with 10 assists during a 16-game stretch in which he failed to record a point in just three contests. One where he came up empty was against the Senators.

Suzuki also did not post a point versus Ottawa last month either, but he has eight goals and nine assists in his past 12 contests.