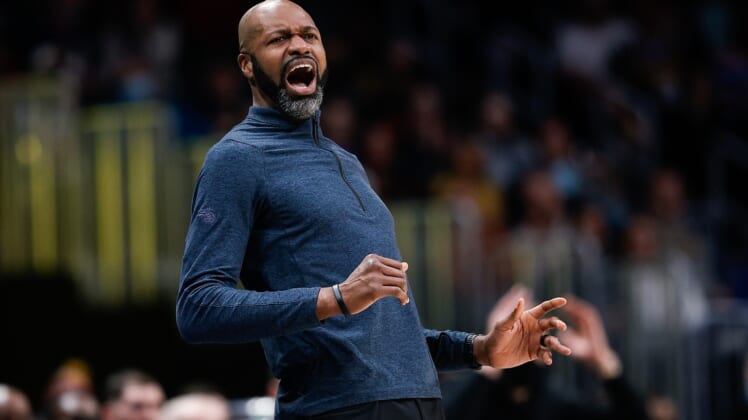 The humbled Orlando Magic begin the second half of a six-game homestand on Thursday night with a matchup against the Detroit Pistons.

Detroit and Orlando, who have been officially eliminated from playoff contention, meet for the fourth and final time this season. The Pistons won the first two games by a combined 12 points, while Orlando posted a 119-103 home victory over Detroit on Jan. 28.

Orlando found itself in the path of a hurricane on Tuesday night, and the storm lasted four quarters in a 150-108 shellacking by the Brooklyn Nets.

Although Brooklyn shot 60.2 percent as a team and had seven players score in double figures, it was Kyrie Irving who dazzled in particular. Irving scored 41 of his career-high and franchise-record 60 points in the first half as the Magic allowed a team-record point total.

Orlando gave up 148 points to the host Atlanta Hawks on Nov. 11, 1989. Tuesday’s loss also tied for the fourth-largest margin of defeat in Magic history, five points shy of the record set during a 122-75 setback to the Chicago Bulls in 2017.

Brooklyn led 48-30 after the first quarter and 86-56 at halftime to establish new franchise marks for points in an opening period as well as a single half. Orlando got within 93-74 early in the second half before the Nets pulled away.

Orlando first-year coach Jamahl Mosley was asked postgame what he saw on the defensive end, and his answer was simple.

“Kyrie Irving,” Mosley said. “At the end of the day, that’s what it was. He was comfortable on the floor and he’s a great basketball player. That’s what he did tonight and he showed it. So, you gotta tip your hat to him, tip your hat to the team, tip your hat to what they’ve done. He’s a special player and that’s the reason why he is who he is.”

The fifth overall pick in last year’s draft has been hampered by a right ankle injury sustained against Toronto on March 4, forcing him to miss three games and limiting him to 22 minutes in Sunday’s overtime loss to Philadelphia. Suggs is listed as questionable for Thursday.

Marvin Bagley III (13 points) scored in double figures for the eighth straight game, while rookie Isaiah Livers recorded season-best totals in points (16) and 3-pointers (four) in 32 minutes off the bench.

“Shoutout to coach (Dwane) Casey, he did a really good job with the rotation trying to keep everybody fresh as possible with the circumstances that we’re in,” Livers said. “We knew what it was going to be when we came into the game, and I felt like everybody handled their assignment the right way.”

Casey has 99 career victories in three-plus seasons with Detroit. He had four players score in double figures against Miami, led by Jerami Grant’s 22 points.