After blowing lead, Devils regroup to edge Flames in OT 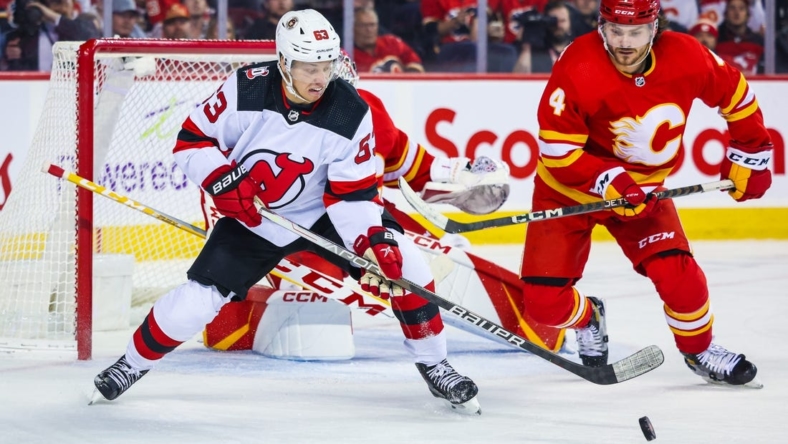 Fabian Zetterlund scored a power-play goal 2:38 into overtime as the New Jersey Devils blew a two-goal lead before extending their winning streak to six games with a dramatic 4-3 victory over the host Calgary Flames on Saturday night.

The Devils are on their first six-game winning streak since ending the 2011-12 season with six straight wins when they reached the Stanley Cup final as the sixth seed.

Calgary’s Elias Lindholm was assessed an interference penalty on John Marino in the defensive zone with 3:46 remaining. Zetterlund then won it by burying a one-timer from the left faceoff circle into the net after getting a cross-ice pass from former Calgary defenseman Dougie Hamilton.

Nathan Bastian and Miles Wood scored in New Jersey’s three-goal opening period as the Devils took a 3-1 lead. Jack Hughes collected two assists, including the secondary assist on the game-winner after being stopped twice in overtime.

Nazem Kadri scored in the game’s opening moments, Lindholm tallied in the second and Nikita Zadorov netted the tying goal 3:12 into the third as the Flames lost their fourth straight.

New Jersey goalie Vitek Vanecek made 27 saves while starting goaltender Mackenzie Blackwood was held out with a lower-body injury.

Markstrom made 31 saves, including consecutive stops on Hughes and Jesper Bratt breakaways in a 10-second span in the third.

Just 89 seconds in, Kadri gave Calgary the lead when he swooped in for the rebound of a Trevor Lewis shot following a giveaway by New Jersey defenseman Damon Severson in the left corner.

Less than three minutes later, Hughes sent a backhand pass from behind the net between his legs to Bastian, who lifted a one-timer from in front of the crease by Markstrom.

New Jersey took a 2-1 lead with 12:10 remaining when Tomas Tatar used his skate for the pass to Zetterlund, who lifted the puck over Markstrom’s left pad. Wood extended the lead to 3-1 by redirecting a pass from Michael McLeod and shoveling the puck under the crossbar with 3:22 remaining.

Lindholm made it a one-goal game 4:48 into the second by pouncing on a rebound after Vanecek made a pad save on Noah Hanifan. Zadorov tied the game when he eluded Nico Hischier to the crease, got a pass from Blake Coleman and lifted the puck into the net.