After blowing 3-0 lead, Sens down Kraken in OT 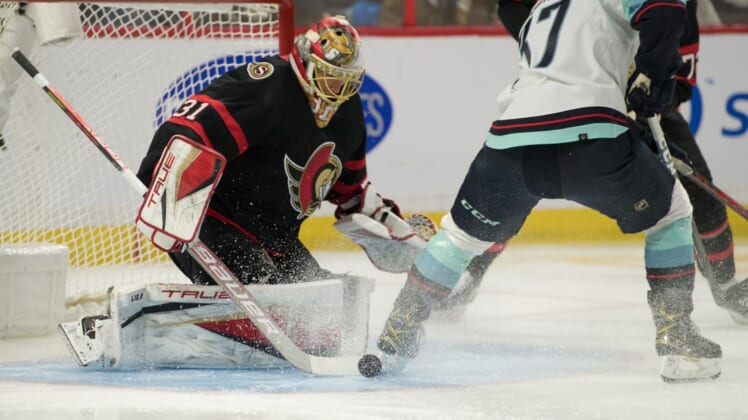 Josh Norris scored twice, including a power-play goal at 2:34 of overtime, as the Ottawa Senators defeated the visiting Seattle Kraken 4-3 Thursday night.

Brady Tkachuk had a goal and an assist and Parker Kelly also scored for the Senators, who won their second in a row following a five-game skid. Goaltender Anton Forsberg made 30 saves.

Jared McCann, Ryan Donato and Mason Appleton scored for the Kraken, who rallied from a three-goal deficit in the final 11 minutes of regulation. Chris Driedger stopped 23 of 27 shots for Seattle, which suffered its fourth consecutive defeat and dropped to 1-9-2 in its past 12 games.

Norris’ winner came after Seattle captain Mark Giordano was called for tripping Tim Stutzle in overtime. Playing four-on-three, Norris took a pass from Thomas Chabot and blasted a one-timer from the right faceoff circle past Driedger.

With Seattle trailing 3-0, McCann scored in a turnaround wrist shot from the right faceoff circle at 9:14 of the third. Donato scored 36 seconds later, redirecting Jamie Oleksiak’s shot from the point into the net to pull Seattle within 3-2.

The Kraken tied it at 13:01 as Appleton’s shot from the bottom of the right faceoff circle trickled through Forsberg’s pads.

The Kraken appeared to open the scoring at 8:17 of the first period on a goal by Appleton. But Ottawa coach D.J. Smith challenged the play and a video replay determined the Kraken were offside.

The Senators swung momentum their way by scoring just 15 seconds later as Norris tipped the puck into the net at the right post after taking a pass from Tkachuk at the left point.

The Senators took advantage of a pair of Seattle turnovers in its own end to take a 3-0 lead in the second.

Tkachuk made it 2-0 at 5:43 after Oleksiak’s clearing attempt was intercepted at the blue line. Artem Zub’s slap shot from the right point was knocked down in front of the net and the puck fell to Tkachuk, who chipped the rebound over Driedger.

Kelly extended the lead at 7:40 after Adam Larsson fanned on a pass just inside the Seattle blue line. Kelly jumped on the loose puck and scored on a wrist shot from between the top of the faceoff circles.