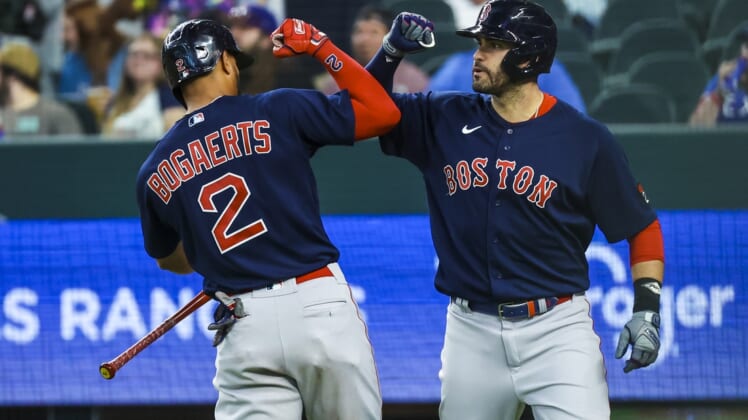 The suddenly offensive-minded Boston Red Sox will go for a sweep against the Texas Rangers when the teams square off on Sunday in the finale of a three-game series in Arlington, Texas.

Austin Davis (0-1, 2.70 ERA) will take the mound for the Red Sox — the first start of his career after 98 relief appearances — in what’s expected to be a bullpen game for the Boston staff. Texas will counter with fellow left-hander Martin Perez (1-2, 2.10).

The Red Sox beat Texas 11-3 on Saturday after winning 7-1 in the series opener. It’s the first series win for Boston since April 11-13 at Detroit and also marks the first time the Red Sox have won two straight games since April 16-17 at home against the Minnesota Twins.

Boston has 18 runs in its past two contests after averaging 3.5 runs per game in the 31 games previous to this series. Saturday’s game marked the first time the Red Sox had at least two home runs in the same game since May 3, and Boston’s 11 runs are the most it has scored in a game this season.

“Overall, it was another good offensive night,” Red Sox manager Alex Cora said. “We did a lot of good things.”

J.D. Martinez homered and extended his hitting streak to 15 games as the Red Sox won for the third time in their past four contests. Martinez has reached base in all of his 26 games this season. Rafael Devers also had a home run — a two-run shot — and Enrique Hernandez drove in three runs.

Boston did all that damage without outfielder Alex Verdugo in the lineup. He is day-to-day with a right-foot contusion he sustained in Friday’s win and still had soreness with it on Saturday.

“(Verdugo) was trying to move around, but obviously he doesn’t feel great, so we have to be smart about it,” Cora said.

The Rangers managed seven hits from seven different players on Saturday. But overall, they are in the midst of a season-long hitting slump to go with their pitching struggles.

Kole Calhoun had two RBIs on Saturday with a double and has four hits in the series. Corey Seager had Texas’ other run batted in on Saturday.

“Not a great day for us,” Texas manager Chris Woodward said after the game. “We know those guys had been struggling coming in as far as the win/loss column, but they are a team that’s been together for a while, and they have some really good hitters.

“Bottom line is they just kicked our butts today. We really didn’t do much of anything. We made some mistakes, and they made us pay for them. We didn’t do enough to compete today.”

Perez, who pitched for Boston the past two seasons before returning to the Rangers as a free agent in the offseason, has surrendered just two earned runs over 26 1/3 innings (0.68 ERA) in his past four starts after dropping his first two outings. He will be expected to eat up some innings for a Texas pitching staff that’s had to use its bullpen plenty in the past two games.

Davis has thrown two innings of scoreless relief against the Rangers in his career.